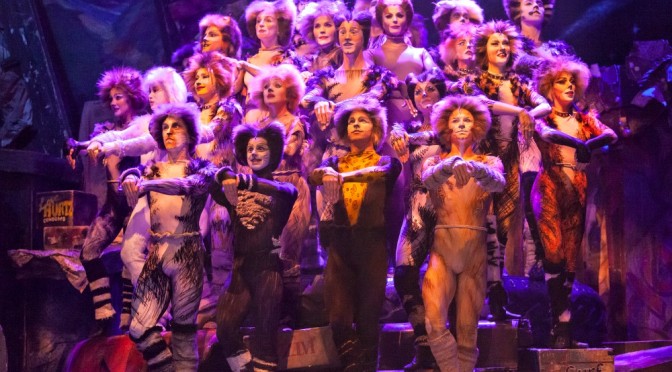 A Who’s Who of entertainment, along with plenty of D-Listers, flocked to the Regent Theatre on a very wet, humid Sunday evening to see the musical that never dies: CATS.

Stars such as Rachel Griffiths,Chrissie Swan and Molly Meldrum, stepped out on the red carpet for the cameras.

Whether you love or hate Cats, Andrew Lloyd Webber’s show has earned a place in the record books as one of the longest running theatre shows in both Broadway and West End history, starting in 1981.

The show has won numerous awards and honours, including countless Tony and Laurence Olivier Awards.

The musical is based on the collection of children’s poems Old Possum’s Book of Practical Cats written by T. S. Eliot in 1939. It tells the story of a tribe of cats called the Jellicles.

Much of the attention was on the lead role Grizabella, played by singer, actress and The Voice judge Delta Goodrem in her stage debut. Grizabella is the ageing former Glamour Cat who has lost her beauty and now only wants to be accepted by the others.

During an earlier press conference promoting the show  media conference, Delta spoke about taking on the role ofGrizabella and the challenges that came with it.

“It’s definitely a new area of my performing that is such a new discovery and I feel excited about,”Delta told The Sydney Arts Guide, “I feel that I would take on any good role that came my way, but right now being immersed in Grizabella is a real joy. Musicals had never crossed my path before … I didn’t know Cats or the storyline before but I quickly fell in love with it.”

Goodrem said she found a close connection with the character who sings the musical’s signature song, Memory.

There was not an empty seat left in the 2000 seat capacity Regent Theatre on opening night.

Not surprisingly there were a lot of young children in attendance, many waiting outside the stage door after the end of the show, hoping to catch a glimpse of Delta.

This is my first time seeing CATS and overall I was very impressed. The normally brightly lit stage and orchestra pit was transformed into a dark, gritty, moody, abandoned industrial junkyard.

The main cast were very talented and entertaining to watch. The singing was great, although it was sometimes hard to hear properly. The hair, make-up and costumes were spectacular.

The complex dancing and choreography was excellent and during the intermission, performers in cat outfits prowled and meowed up and down the aisles and along the seats, much to the amusement of the audience and even posed for selfies.

Delta Goodrem as Grizabella was fantastic, although I was disappointed that she had very little time on stage despite her top billing. However, she made her presence felt with a beautiful rendition Memory that made the hairs on everyone’s back stand up.

Like Grease, you should see CATS at least once in your life and enjoy the all singing all dancing furry spectacle.

CATS THE MUSICAL is playing for a limited time at the Regent Theatre in Melbourne until 24th January.