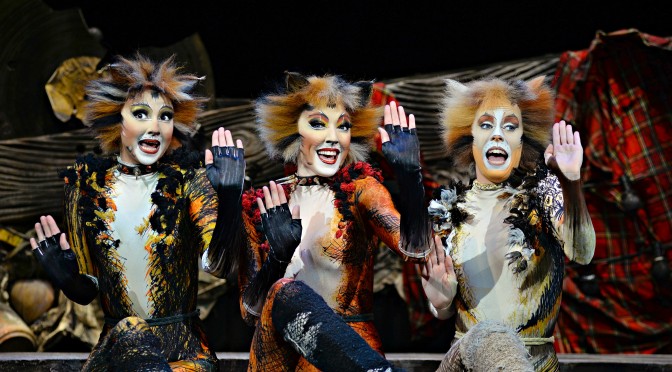 For those few not in the know the the Andrew Lloyd Webber musical CATS is drawn from the whimsical verse of TS Eliot’s Old Possum’s Book of Practical Cats and a few other choice bits of the great British poet’s works. The musical is arranged around  a dozen or so scenes.

The show’s current season  at the Capitol is a revival of the classic West End production which premiered way back in 1981.

In CATS  the Jellicle Cats gather once a year to hear who will be chosen by their leader, Old Deuteronomy, to journey to the Heaviside Layer to be reborn into a new life, after the traditional nine lives that they have already spent. One by one, the cats take the stage to make their case to be reborn.

Andrew Lloyd Webber’s music is as vibrant as ever. Webber cleverly tags each of the main cats with a different style of music. My favourite show numbers were the Company’s rendition of The Jellicle Ball and the hit song Macavity.

Trevor Nunn’s directorial stamp/imprint remains as strong as ever. Gillian Lynne’s. together with assistant Jo-Anne Robinson’s, choreography remains as stunning as it ever was. It is amazing and breath-taking to see the cast be as cool as cats and take on the cat-like characteristics on stage, crawling, slinking, grooming and sometimes even massaging other cats.

John Napier’s set design of the huge junkyard in which the cats frolic is as stunning as ever, as are the huge, vibrant array of costumes.

Pop music star Delta Goodrem makes an impressive music theatre debut playing the prized lead role Grizabelle, the former glamour cat turned pariah. During the show Goodrem gets to sing the show’s classic anthem Memory twice, and with both renditions she wins a rousing reception from the audience.

The fleet footed Daniel Assetta is just dazzling as the flamboyant Rum Tum Tugger, channelling any number of rock and roll stars.

Dominique Hamilton and Brent Osborne’s cat burgling duo Rumpleteazer and Mungojerrie are great to watch. Equally impressive  with their athleticism  are Christopher Favaloro’s Mr Mistofelees and James Cooper as the charismatic Macavity.