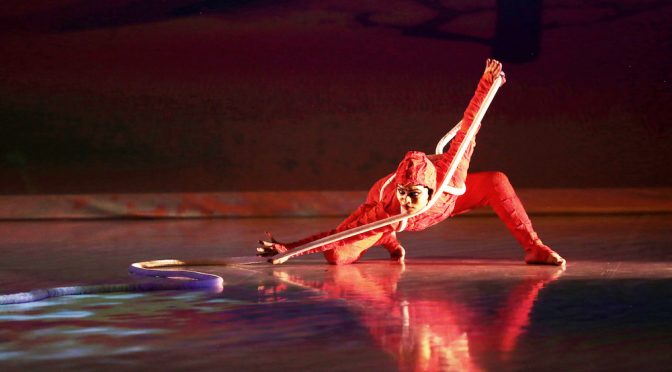 “All grown-ups were once children… but only few of them remember it.”

Based on Antoine de Saint-Exupéry’s much loved 1943 children’s book (Le Petit Prince), the extraordinary live event THE LITTLE PRINCE will be presented in the Opera House’s Joan Sutherland Theatre from 26th May to 6th June in an Australian exclusive premiere.

THE LITTLE PRINCE is a stunning spectacular of circus, dance, aerial acrobatics and ground-breaking video mapping technology. It comes to the Opera House after sell-out seasons at Folies Bergère Paris in 2019 and Dubai Opera last year.

The highly immersive, grand-scale performance, brings to life the cosmic world of an aviator lost in the desert who meets the Little Prince on his journey from one planet to another in search of a sheep. An omnipresent narrator accompanies the Little Prince as he meets many magnificent characters who communicate harmoniously through dance, gesture and movement. Throughout his journey, THE LITTLE PRINCE explores themes of friendship, love, technological progress, consumption and the decay of modern society.

The story of THE LITTLE PRINCE remains a fixture of contemporary society as more than 75 years after its release, Antoine de Saint-Exupéry’s story remains one of the best-selling and most translated books ever published. It has been translated into over 300 languages and dialects, and has sold an estimated 140 million copies.

Sydney Arts Guide has two double passes to give away to the Australian premiere of THE LITTLE PRINCE at the Sydney Opera House on Wednesday 26th May at 7pm. To enter the competition email editor.sydneyartsguide@gmail.com with THE LITTLE PRINCE PROMOTION in the subject heading. In the body of your email say who is your favourite character and why. The two winners will be advised by email.

Penn & Teller will bring their record-breaking Las Vegas live show to Sydney for eight performances at the Capitol Theatre from 14 – 21 April 2020.

Penn & Teller’s Australian tour was originally scheduled for January 2020 but was unable to proceed due to Teller requiring urgent back surgery. As the Opera House’s largest internal venue, the Concert Hall, is closed while major renewal works are undertaken from February this year, the Opera House will now present the rescheduled season of Penn & Teller at the Capitol Theatre to accommodate the huge response and demand from audiences.

The life-long friends, with a career together spanning almost half a century, have redefined popular magic for over 40 years with their unusual mix of mind-blowing magic tricks, comedy and ‘blunders’. The pair are stars of the acclaimed Showtime series Penn & Teller: BS!, which received 13 Emmy nominations and was the longest-running series in the history of the network.

Their highly anticipated return to Broadway was the highest-grossing non-musical on Broadway for its entire six-week run. True pop culture stalwarts, the duo has performed in hit television shows, including Friends, The Big Bang Theory, Modern Family and The Simpsons, and they share a star on the Hollywood Walk of Fame.

They are also stars of the hit TV series Penn & Teller: Fool Us!, seen on ABC Comedy, which challenges up-and-coming and veteran magicians to try and fool Penn & Teller.

From April 14, step into Penn & Teller’s world of magical genius and let these masterful magicians teach you a trick or two!

PENN AND TELLER will play the Capitol Theatre, 13 Campbell Street, Haymarket between April 14 and April 21. Monday to Saturday at 7.30pm and Sunday at 5pm. 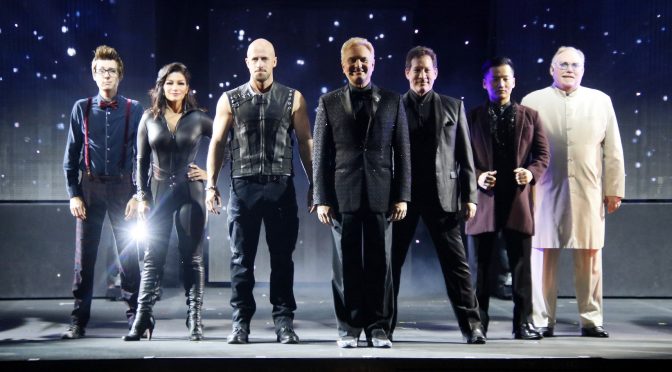 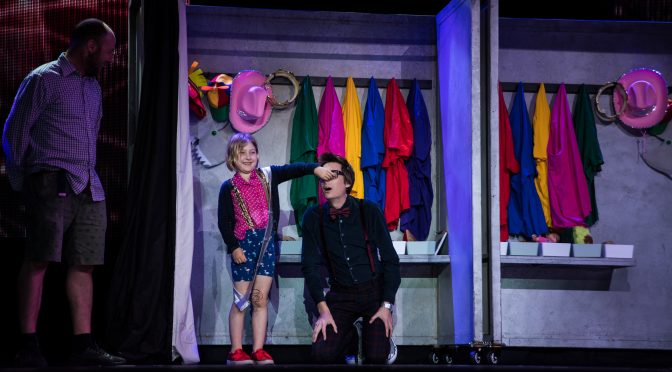 This was a great family show perfect for this time of year and a great, night in the theatre.  There is so much to enjoy. One is constantly astonished. The main discussion point after the show is- how did they do such and such, and of-course it does one’s head in trying to figure things out!

There was plenty of sharp repartee through the night. Some examples- ‘There’s no need to read everyone’s mind. There’s Facebook’…’I can’t touch you all. I’m not Adele’s music.’

Many of the routines saw audience members being picked out and brought up on stage which was a huge, fun part of the show.  Their reactions were priceless. Kevin James aka the Inventor brought up a band of young kids onto the stage to join him and  out of  tissue paper made a magical snowball effect which had the kids enthralled.

Jeff Hobson aka The Trickster had a young woman in stitches on stage as she tried to get one of his simple tricks right; an egg in a bag disappears and then returns.

Chris Cox aka The Mentalist brings a young woman on stage and predicts the word she has in her mind and the clothes she will choose from a rack on stage. Cox’s acts are fascinating.

Jonathon Goodwin’s daredevil acts are intrepid.  The acts are great examples of escape artistry.  He is wrapped in a straitjacket and then balls of fire sound him and he is given precious little time to get himself out of the straitjacket before he will be engulfed in flames. Spine chilling stuff.

There are plenty of disappearing tricks which leave one perplexed. A woman. Jinger Lee aka the Conjuress is put in a barrel that is set alight and then shortly after we see her reappear in the audience.

An Ha Lim’s aka the Manipulator’s card tricks are stunning, showing a great deal of skill and dexterity.

Really there is something for everyone to enjoy in this show. Highly recommended, THE ILLUSIONISTS : DIRECT FROM BROADWAY is well worth a visit playing at the Concert Hall, Sydney Opera House.