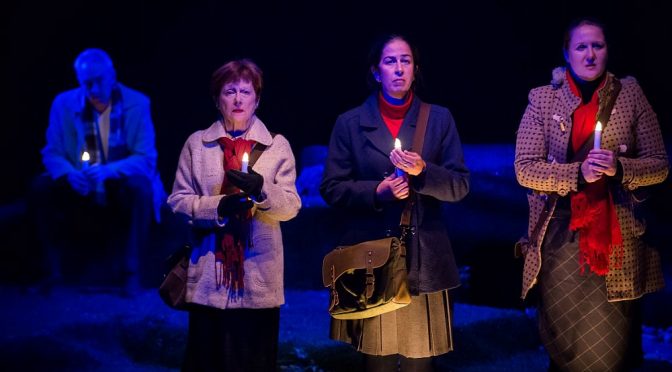 Deborah Brevoort’s  play is based on the terrorist attack on December 21 1988 in which Pan Am Flight 103 exploded in mid-air, due to a time activated bomb in a suitcase, as it travelled from London to New York City. The explosion scattered pieces of the plane over Lockerbie, Scotland, and the surrounding hills, Scotland, as well as the remains of the 243 passengers and 16 crew members. Twenty-one houses on the ground were destroyed, and 11 people there lost their lives. An international conflict arose in the aftermath and eventually the Libyan leader Qaddafi extradited two suspects in 1998, one sentenced to 27 years and the other acquitted.

THE WOMEN OF LOCKERBIE is a poetic drama, in the form of a Greek tragedy, takes place on a hillside near Lockerbie seven year after the attack as a woman roams searching for the remains of her son. It is a moving and intimate portrayal of the effects of grief. As one of the women say, grief is a guest who remains too long, and the characters must come to terms with loss and decide whether the desire for justice and hate should rule their lives or whether they can somehow turn these feelings around to a more compassionate approach.

Madelaine Livingston, played by Kim Schad, is a New Jersey housewife who lost her son but whose body was never found. Grief has been all consuming in her life as she cannot find closure and it is destroying her marriage to Bill Livingston, played by Stephen Snars. These people portray their loss in very different ways but cannot connect and support each other.

They meet Olive Allison, played by Michelle Masefield, a woman of Lockerbie with her own tragic story. Ollie and two women, played by Rebecca Fletcher and Anne Geenen, form the “chorus” and offer a special kind of grief counselling, telling their own tragic stories about that awful day when the plane crashed quite literally on their houses.

Directed by Bernard Teuben this is a dark and emotional journey set with very subdued lighting and traditional Scottish music. A touch of humour to lighten the atmosphere is found in the character of Hattie, played by Penny Johnson, who is a cleaning lady working for George Jones.

George Jones, played by Larry Murphy, is a US Government official whose job it is to burn the clothes of the victims found in the plane’s wreckage. The women, determined to convert an act of hatred into an act of love, want to wash the clothes of the dead and return them to the victim’s families in a symbolic act of cleansing.

This is a sentimental and touching production and very much resonates today when acts of terrorism proliferate. The play asks how do we respond?

THE WOMEN OF LOCKERBIE is playing till the 12th August. Performance times are Wednesday’s, Friday’s and Saturday’s at 8.15pm and Sundays at 4.30pm at the Pavilion Theatre. Castle Hill.