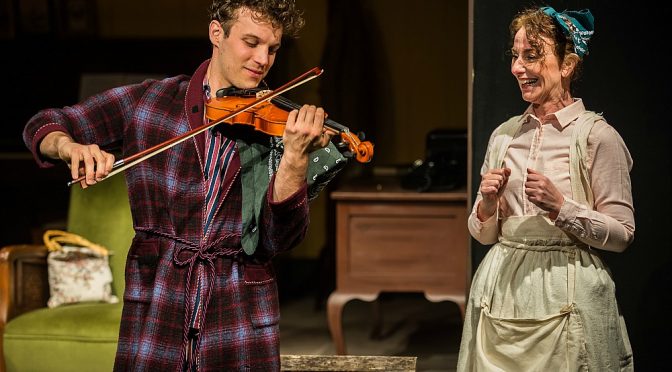 Featured image- Julian Floriano as Andrea and Mary Clarke as Dorcan in ‘Ladies In Lavender’. Production photos by Chris Lundie.

Castle Hill Players production of LADIES IN LAVENDER is a poignant, gentle comedy of sibling rivalry, love and lost dreams. Shaun McKenna’s play is an adaptation of Charles Dance’s screenplay for his 2004 film of the same name, which itself was itself based on a short story by William J. Locke.

LADIES IN LAVENDER tells the tale of two sisters, Ursula and Janet, who live in a close-knit fishing village in picturesque Cornwall in 1937. When the sisters discover an unconscious stranger on the beach and nurse him back to health their ordered life of cocoa before bed and the village jumble sale, is transformed.

Jennifer Leslie as Janet Widdington and Sandy Veline as Ursula Widdington are expertly matched and very convincing as the temperamentally contrasting sisters and Julian Florian is ideally cast as Andrea Marowski the young man they rescue.

Slowly the sisters begin to communicate with Andrea and learn a little of his story, discovering he is an aspiring young violinist. With the help of Doctor Mead, played by David Hill, and the very humorous and forthright housekeeper Dorcas, played by Mary Clarke, the sisters’ world slowly begins to revolve around Andrea. They are no longer living in isolation with their dashed romantic memories of the first World War.

Further complications arise when an attractive female visiting artist Olga Danilov, played with much grace by Susie Herring, arrives, overhears Andrea playing, and offers him an exciting opportunity. While Doctor Mead become love struck with Olga the sisters are not impressed with her and serious ramifications ensue.

Director Meredith Jacobs guides this softly humorous, well-crafted, wry, charming play and with the help of beautiful music, which was specially composed for the production, and an intricate set, has come up with a well realised, eloquent production.

For a delightful evening that is emotionally satisfying, do go and see LADIES IN LAVENDER playing till October 14 at Pavilion Theatre, Castle Hill Showgrounds, Castle Hill.