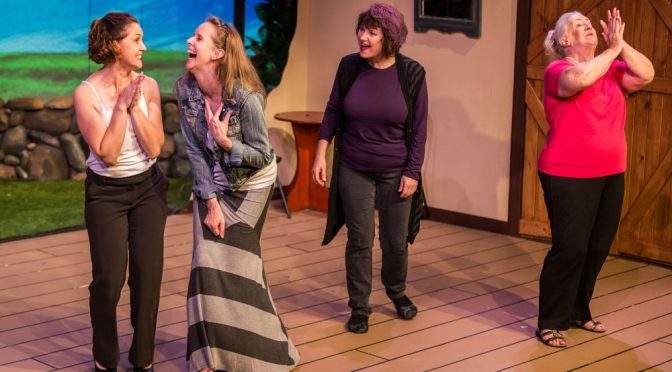 CALENDAR GIRLS by Tim Firth comes from the popular 2003 film of the same name which starred Helen Mirren and Julie Walters.

The play is based on the true story of a Yorkshire women’s club that earned money for its village hospital by having members pose nude on an annual printed calendar. Presented by Castle Hill Players the show is a highly entertaining start to their 2017 season.

CALENDAR GIRLS is about friendship, loss, the strength and beauty of older women and community. The audience greatly appreciated the entire production with intakes of breath at the “nude” scenes and applause for the bravery of the actresses. There is comedy throughout but the jokes are gentle and the more serious moments are played with deep feeling and sensitivity.

The action is centred at the meeting hall of the Women’s Institute (WI) in Knapely Yorkshire.

Set designer Barry Finch and projection design by Annette van Roden provide a perfect backdrop of a rural hall and the countryside beyond. The use of the slides leads the actors through time as the story is played out.

The characters are not young models, but a mixture of ordinary women of a certain age in all sizes and shapes. As one line in a poem from the play says, women, like sunflowers, are at their most beautiful just before they go to seed.

The casting is strong with each woman having a distinctive personality which changes measurably during the course of the play as they deal with the challenges that life throws their way.

The story of Annie, played with great warmth and feeling by Leigh Scanlon, and her ailing husband John, played by Gavin Woodford, form the basis of the story line. Scanlon and Megan Hipwell, who plays Annie’s vivacious and and ambitious friend Chris, show a good rapport on stage.

Sandy Velini as Marie almost steals the show playing a woman who is constantly thwarted in her attempts to dominate and control the group.

Faith Jessel as Ruth transforms from a meek and apparently very conservative wife to a strong character who will not tolerate her husband’s philandering behaviour.

Margaret Olive as Cora is slightly bawdy but also concerned about the effects of her actions on her daughter and her reputation as the church organist.

Jacqui Darbyshire as Celia has to overcome the politics of the women at the golf club and gain her independence.

Annette Emerton as Jessie is a steady backbone for the group and her character demonstrates confidence in being a mature, older woman.

The men, Todd Beilby as Rod, Luke Hawkins as Lawrence and Ben Freemen as Liam/Brendan Hulse, play supporting roles and are essential in filling in the background story of these women and lending authenticity and depth to their journeys.

Brief appearances are also made by Jean Churchward as Lady Cravenshire and Christine Wilson as Elaine, both being characters who lighten the mood and add touches of humour to the evening.

This Castle Hill Players production, directed by  Annette van Roden,  is a funny, sincere, and thoroughly enjoyable night at the theatre.