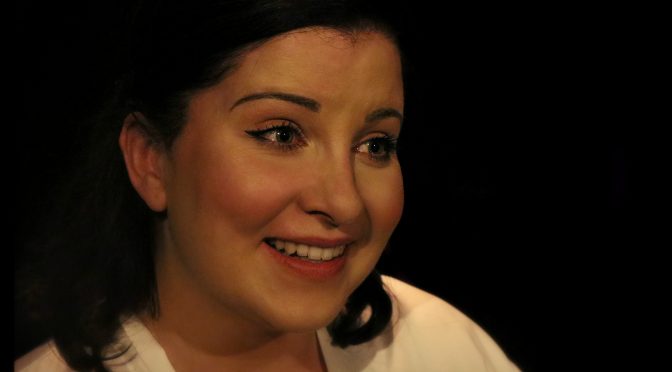 My husband watches reality TV. He loves Masterchef (he’s a chef and reckons he enjoys watching them stuff up) as well as Survivor and I’m A Celebrity Get Me Out of Here.

I admit to occasionally watching episodes of The Bachelor and The Bachelorette and musing over how genuine the kissing and conversations really can be under the completely staged and producer manipulated circumstances.

It’s puzzling. How much of it is ‘reality’ and how much is side-coached and constructed? How real can we be with a camera monitoring everything?

But then, we play different parts and roles in our daily lives anyway and at different stages in our lives so having a camera in the face really just adds another dimension to ‘playing the part’.

Bearfoot Theatre’s latest production PLAYING FACE, written, directed and with original compositions by Cassie Hamilton has another layer to it. Cassie is a transgender woman and Bearfoot Theatre is the Hunter Region’s leading LGBTQIA+ Theatre Company. Company Producer and Production Manager is Riley McLean who is also a transgender playwright and director.

In her lengthy Writer/Director’s notes in the program Cassie credits Riley with helping her to “come to my own realisation about identity the way I did”. She also discusses the theatrical elements used to

“… show the disconnection between each character and how they are fully consumed with the performance of their own identity.”

Interestingly, her comments about her journey as a transgender woman

“…has highlighted the glaring disparity between men and women’s experiences of the world and the ways sexism is still present in many of the things we consider ‘the norm’”.

Oh wow. Coming at it from both sides! What a brilliant perspective to have and that has then been combined with one of the best aspects of emerging contemporary theatre – there are no theatrical rules. Issues are presented in a hybrid form borrowing from whatever theatrical elements, techniques and conventions suit their ideas and then some.

So, what is presented is a gothic and surreal reality home TV program titled Living with the Kings that uses multimedia, original live music and 4 actors on stage (and a few more in the projected film footage) in a circling dervish of rampant sexuality, 1950’s housewife mentality, Hitchcock horror and film noir mystery. It’s heady stuff!

Even the printed program looks like a combination of a zine and vintage romance comics, all in black and white. The whole package is a marvellous contrast to some of the more conventional shows that are often presented in our region – those lovely old drawing room comedies, farces and ‘classic’ plays that Repertory Theatres like to put on.

Don’t be mistaken; this is not criticism – I love and appreciate all the genres of theatre. However, it is very exciting to be smacked in the face with something that is so completely and utterly original and leaves you reeling from its theatrical challenge. Bearfoot Theatre’s PLAYING FACE does something that has become increasingly uncommon for stage production; it invites discussion.

Harold Phipps and Stephanie Priest are Mr and Mrs King, a couple that broadcast their own TV reality show Living with the Kings from their own home. 24-hour Cameras are in every room bar one – Mr Kings’ bedroom. The premise of the show is that guests are invited into their home for 3 days and the footage of their interactions is continually broadcast, with the promise of a grand finale on the 3rd evening.

The latest guests to the home are The Wild Violets, a musical duo comprising Anna Lambert as a vamp chanteuse, Violet Young and Carl Gregory portraying her suffering partner and moody songwriter, Mr Wilde.

It’s quickly evident that Mr King is a sexually predatory creature and Violet Young is openly willing and compliant to his attentions. Mr Wilde is an alcoholic and a depressive and his partner’s blatant flaunting of her sexual complicity with Mr King pushes him further into the bottle and the pits of despair, resulting in some dire and dirge like musical composition and disturbingly aggressive confrontations.

Constantly flitting in and out of the picture is the Stepford Wife clone Mrs King, whipping up delicious meals and hoping that Mr King notices how pretty she looks today. Her nightly ‘cocktail’, prepared and administered so lovingly by her husband, ensure that she sleeps soundly and hence rendered unable to react to the nightly shenanigans of her wayward husband. However, she knows well enough and under her bright exterior, the well of frustration and betrayal is bubbling and stewing away.

Opening the show and at regular intervals throughout, grainy and corrupted footage of the Kings with previous guests is shown. Christopher Shanko as Marvin Markle, James Chapman as Gustave Flambe and Brittany Biles as Madam Amourex give us fleeting glimpses of what appears to be a cooking episode that also clearly deteriorates into something a little macabre.

But perhaps not as macabre as what occurs with the Wild Violets. We jump between stage action on the suitably multifunctional set comprising of little more than a raised platform, designed by Cassie Hamilton, and the projected footage. At some stage the previous cooking episode footage is replaced by what is happening in tandem now with Mrs Young, Mr Wilde and the Kings and the unfolding tension and erupting violence being captured by the house cameras.

Clearly Mr King has to create and orchestrate some dramatic tension in working towards the 3rd night grand finale or there would be no point to the Living with the Kings show and cameras in every room. Except his bedroom.

Yet the question of how much is initially deliberately manipulated by Mr King and the tipping point of when events spiral out of his control is a point of fascination.

PLAYING FACE is a very contemporary play utilising and highlighting the current questions about gender roles, living in a media dominant and image conscious society, domestic violence and the rising popularity and accessibility of reality TV and its cross over into daily life.

The cast is consistently striking in their roles; Harold Phipps roams like a giant preying mantis as Mr King, Stephanie Priest is a busily brittle, bright and broken Mrs King, Anna Lambert is truly a chanteuse (although the songs would not be popular) and delights with her siren character timing while Carl Gregory is haunted, shrunken and eerily volcanic as Mr Wilde.

The original music is unobtrusively performed by Keiran Norman and lighting by Lyndon Buckley supports and enhances the gothic and surreal atmosphere.

It will be interesting to see where this play goes after this season. I wouldn’t be surprised to see it being picked up by other companies as it certainly challenges quite a few conventions with its delightful contemporary satirical darkness being presented in an innovative theatrical form.

PLAYING FACE has completed its Newcastle season at the Civic Playhouse.