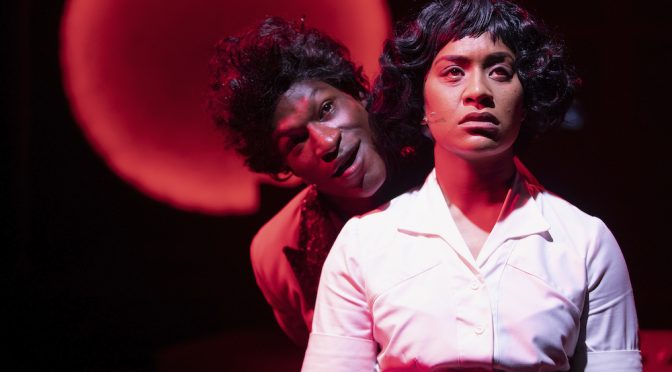 Tony Kushner is the author of the ground breaking play Angels In America Parts 1 and 2. This is his first musical with Kushner penning the book and lyrics and Geanine Tesori composing the music. The play took them four years to write and is based on Tony Kushner’s reaction to growing up in the Deep South, identifying as a southern Jew, and living in  the vicinity of impoverished Afro Americans.

Elenoa Rokobaro stars as Caroline Thibodeaux, a poor Afro American divorcee working as a house cleaning maid in a southern jewish home belonging to the Gellmans. She is sad and bitter, realising that any hopes or dreams she has had have been crushed into dust. Her only purpose in life is to provide for her three children on a $30 a week wage.

Young eight year old Noah Gellman has transferred his affection for his deceased mother onto Caroline. He bonds with her by sharing a cigarette.

Noah’s father Stuart Gellman has acquired a new wife from New York, Rose Stopnick-Gellman. She is totally bewildered by her transplantation to Louisiana, unable to cope with its oppressive heat, her inability to develop a relationship with her stepson and has constantly bungling behaviour in an attempt to be both gracious to Caroline as well as being gently assertive as her employer.

Reluctant to take money from a child she nevertheless succumbs so that her children can buy a few trinkets at the local dime store.

At a Chanukah party hosted by Rose, Stuart and Grandma Gellman Rose’s father Mr Stopnick, down from New York, gives Noah a twenty dollar note. Noah leaves it in his pocket, Caroline retrieves it and threatens to keep it. This leads to an explosion of hateful remarks revealing deep prejudices on both sides of the racial divide.

Meanwhile on the sidelines a Greek chorus of Motown like Supremes urge Caroline to break out of her oppressed situation.

A moon goddess is always trying to calm the situation and a red suited, lascivious devil is trying to tempt Caroline with no prospect of success. Adding to her woes is a rebellious, outspoken daughter Emmie who clashes with her mother over her mother’s submissiveness.

All this takes place with background music which ranges from gospel, blues, soul, rhythm and blues, funk and klezmer through to operatic like ballads. These musical styles are gorgeously navigated by Lucy Bermingham, the Musical Director who leads a five piece band squashed somewhere backstage.

Elenoa Rokobaro is dazzling as Caroline Thibodeaux. Her soaring gospel vocalising nearly lifted the rafters off the Hayes Theatre.

The trio played by Ruva Ngwenya, Emily Haver and Alexandra Fricot are not so much a harmonising Supremes but are more like the grunting and grinding funk of the Ikettes featuring a young Tina Turner.  They also play multiple roles all of which are performed with great accomplishment.

Andrew Cutcliffe as Stuart Gellman has a dramatically thankless role in that he must be zoned out from everybody and everything around him, including his son, seeking consolation in clarinet playing.

Daniel Harris and Ryan Yeates alternate the role of Noah Gellman. At our performance Ryan Yeates  played the naive, idealistic, sweet and at times self centered Noah which he plays with great brio and establishes a strong chemistry with the Caroline character.

Nkechi Anele plays Emmie, the rebellious daughter of Caroline, with passion and fire.

Elijah Williams gets to demonstrate his multi talented acting skills playing in the roles of a lascivious devil by the dryer in Caroline’s laundry, a shocked bus driver announcing the assassination of President John F Kennedy, Joe, Caroline’s young son, and the Navy man who beat up and left Caroline.

Special mention must be made of the veterans in this otherwise young cast. Genevieve Lemon slips into the role of Grandma Gellman who is always trying to appease family arguments with an authentic Jewish touch and warmth.

Tony Llewelyn Jones as Mr Stopnick, a fiery left wing  sympathiser, brings passion, conviction and a slight naivety advocating that Afro Americans should protest with violence. Yet his very tender and loving when talking to his daughter and grandson.

This is a night of powerful and challenging theatre evoking joy, revelling in the gospel, soul, rhythm and blues music of the first half to sadness and tears in Act 2 as the tragedy of Rose’s oppression is fully spelt out.

The change in the title has a dual meaning, both corrosive. The first change  refers to the change in Noah’s pockets leading to conflicts with his stepmother and Caroline. The second meaning refers to all her friends urgings to change from her trapped, embittered resignation to her lot in life, and aspire to greater heights in fulfilling her dreams.

Director Mitchell Butel is a quadruple threat. He can sing, dance, act and direct As director he must deal with the swirl of emotions boiling on stage, contain it and hurl it with maximum impact into our exposed emotions. This is why live theatre is so thrilling.

The set design by Simon Greer is cleverly laid out on four levels with a giant disc at the rear representing the moon and the sun depending on the lighting from Alexander Berlage.

Anthony Lorenz sound design brings the sounds of the band somewhere in the back of the theatre up to perfectly match the vocals on stage.

I have previously referred to the Hayes Theatre as Doctor Who’s Tardis, small on the outside and limitless in size on the inside. This production’s expansiveness encapsulates that feeling.

I must also commend the Hayes Theatre for unearthing unknown musical gems such as this platinum production.

Riveting, exciting, thrilling and dazzling, this Hayes triumph must not be missed. CAROLINE OR CHANGE is playing the Hayes Theatre until 21 September, 2019.