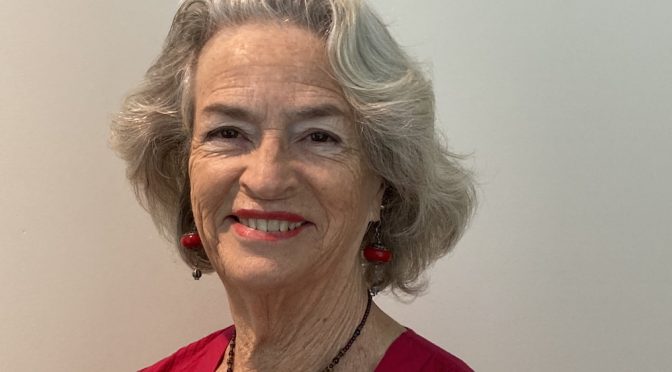 Dance has reviewed over 200 plays for leading  Wentworth Courier in Sydney, whilst working as the editor at the University of New South Wales Press, and presently contributes reviews and articles to Sydney Arts Guide.

Whilst working as the  CEO of the Australian Commercial Disputes Centre, she observed the full spectrum of human emotions and decided to write plays herself.

For this year’s Short and Sweet Festival her entry is  a one woman work ‘The Metaphor’ playing. She is directing, and keeping it in the family, her daughter in law, Julia Dance, an experienced actress and singer, is performing the piece.

This the second time Carol and Julia have worked together for the Short and Sweet Festival. The first was in 2018 with another of Carol’s plays, ‘The Woman Who Thought She Thought a New Thought’, performed by Julia and Sasha Dance, Carol’s granddaughter.

Dance says that she has painted most of her life. She has been able to concentrate it more since she retired 15 years ago Her first real project was as the artist-in-residence at the commercial art gallery in Port Douglas, followed by a solo exhibition at the Seymour Centre.

She enjoys painting alone, in a studio and getting into the ‘zone’. She has also made constructions, sculptures and etchings. Dance says she tends to work in a series, one set of paintings  at a time then move on to something very different.

You can catch Carol Dance’s play METAPHOR will play as part of Week 4 of this year’s Short and Sweet Festival on Friday June 18 at 7.30pm, Saturday June 19 at 2pm and Sunday 20 at 6pm at the Tom Mann Theatre, 136 Chalmers Street, Surry Hills.