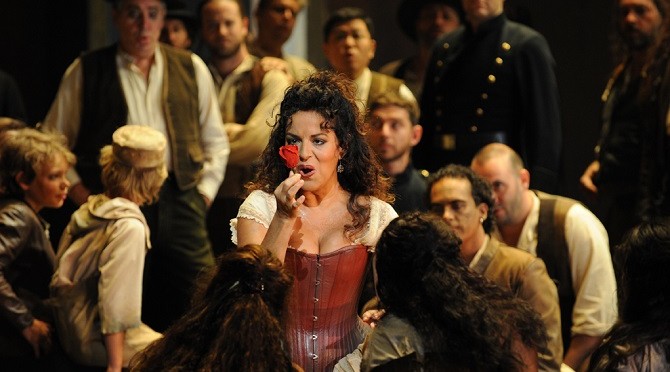 George Bizet’s CARMEN has been wowing opera-goers for over 140 years now with its alluring mixture of the unpredictable and dangerous, love and loathing, and, as the program notes state, “the ultimate femme fatale is back to stamp her feet, toss her hair and dance”.

As a staple of Opera Australia’s programming (the last major run at the Opera House was only a couple of years ago), American director Francesca Zambello was presented with a real challenge in bringing something fresh to the story of that most famous of feisty gypsy girls and the ultimately doomed desires of her suitors, whilst at the same time maintaining the levels of passion and intensity both musically and visually that the audience has come to expect.

As the program notes state: “It takes a certain fire, certain physicality, and a certain throatiness to really sell the feisty Carmen to an audience. As she draws Escamillo and Don Josè to her flame, the audience needs to cheer for this provocative woman from the wrong side of the tracks.”

So how did this performance stack up? Well, let’s just say that if one were to play devil’s advocate and go looking for faults they would be very hard to find. This Carmen had me hooked right from the outset with its minimalist but perfectly lit set and costumes which captured the heat of 19th Century Spain and the characters which inhabited this world.

Much credit needs to go to Zambello for the choreography and sets, but also to conductor Antony Walker for his marvelous interpretations of what are after all some of the most memorable musical moments in all opera. Both choruses, including a children’s chorus of boys and girls, were excellent, and whilst the orchestra and choruses set the framework, it was the leads that provided the real highlights of the show.

Soprano Natalie Aroyan as Micaela, the country girl, was highly impressive, as was Michael Honeyman as Escamillo the torero, whose rendition of the classic Toreador gave this reviewer goose bumps.

Dmytro Popov as Don Jose was simply fabulous, the richness of his tone conveying the increasing desperation of his unrequited love. His rendition of the Flower Song provided yet another highlight.

Yet it was Spanish Mezzo Nancy Fabiola Herrera as Carmen who owned the night and, as the program notes suggest, has rightfully earned an emerging reputation as the Carmen-of-the-moment:

“Every so often, a mezzo-soprano emerges who can do more than just sing the role – she can inhabit it. With her dark hair, a Latin temperament and an alluring physicality on stage, Herrera is in demand around the world to sing Bizet’s lead, travelling from the Metropolitan Opera in New York to the Deutsche Opera Berlin to the Sydney Opera House in 2014.”

And judging by her performance on Thursday night, she is likely to own this role for a long time to come. It’s not often that one is privileged to see someone whose sheer charisma totally envelops a whole performance, and from the moment Herrera sweeps onto the stage – squeezing oranges into the mouth of any man who opens wide – she totally owns it. There really are too many highlights of her performance and that magnificent voice to single out here but her Habanera does deserve special praise.

And on the subject of special praise, I was particularly enthralled by the two fabulous horses, one of which even managed a curtsy at the end, much to the delight of the audience.

This current incarnation of CARMEN is a must for all opera-goers, serious or otherwise, for a host of reasons, but the opportunity to see the super charismatic Fabiola Herrera in the role was reason enough.

One thought on “CARMEN”