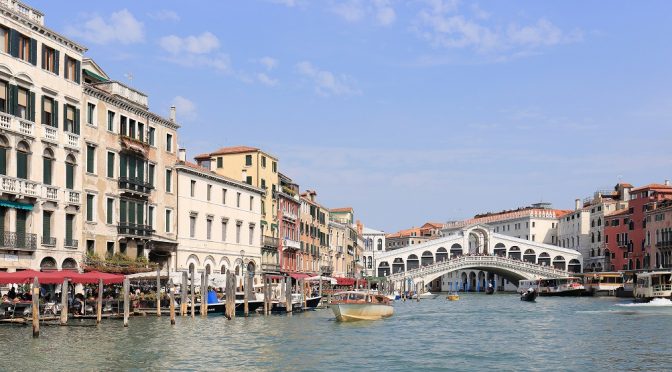 Exhibition on Screen‘s  CANALETTO : THE ART OF VENICE  was filmed in 2018, and based on acclaimed Royal Collection exhibition of the same name, held in The Queen’s Gallery at Buckingham Palace.

Directed by David Bickerstaff it examines the life and times of Giovanni Antonio Canal, better known as CANALETTO (1697-1768) famous for his glorious paintings of Venice . It also looks at the work of some of his contemporaries including Sebastiano and Marco Ricci, Francesco Zuccarelli, Rosalba Carriera, Pietro Longhi and Giovanni Battista Piazzetta.

These works featured in the Royal Collection were bought by the young George III in 1762 from Canaletto’s agent and dealer Joseph Smith, the British Consul in Venice, along with the rest of Smith’s enormous collection of books, paintings, etchings and other works on paper it instantly gave the Royal Collection unrivalled holdings of 18th-century Venetian art.The aristocratic Grand Tour of the era is discussed , with everyone of the era visiting Venice , especially from the UK, seeking a Canaletto .Smith commissioned several of Canaletto’s major works , and his relationship with Canaletto  is examined with the documentary asking – was the artist exploited ?

We have the chance to enter two official royal residences – Buckingham Palace and Windsor Castle – to learn more about the artist, and Joseph Smith, the man who introduced Canaletto to Britain .We follow the careful preservation and restoration of the various paintings drawings and etchings in preparation for the exhibition . The film includes interviews with various curators and experts in Venetian history, bombards us with historical detail and includes great close ups of the actual paintings as well as showing us how this rather heavy and overwhelming exhibition is presented.

The film takes us to both Canalettos’ Venice and contemporary Venice visiting the sites enjoyed by our 18th century counterparts and immortalised in Canaletto’s views – from the Rialto Bridge to the Piazza San Marco, and the Palazzo Ducale to the Church of Santi Giovanni e Paolo , the opera , theatre ,Carnevale and the huge Ascension Day celebration with the marriage to the sea. We also see some of Canaletto’s works when he visited London in the 1740’s.A feature is made of the set of 12 views of the Grand Canal , and Canelleto’s various engravings .

Canaletto’s father Bernardo was a theatrical scenery painter and Canaletto learnt from him how to adjust a composition to increase its drama , and the use of light for vivid effects .We learn about Canaletto’s large studio and his methods of working (we are treated to views of a rare surviving sketchbook) and his great powers of observation and attention to detail as well as his extensive preparation before producing the finished painting . Did he use a camera obscura at times? There is much discussion about this .The possible influence of Palladio is also discussed .

We also see how the figures in his paintings are not just rote blobs to help the composition and fill space but capture individuals, and that Canaletto apparently was a dog lover, given all the dynamic representations of dogs in his paintings .

Not that much is really known about Canaletto who remains rather an enigmatic mystery with little information surviving . He never married and was only admitted into the Venetian equivalent of the Royal Academy in 1763, five years before his death. Even now he is held in little regard in Venice itself but loved internationally.

This fascinating documentary makes you want to jump on a plane to Venice.

CANALETTO & THE ART OF VENICE from  Exhibition on Screen [Facebook] will release nationally on Thursday July 14, 2022.

Find your nearest screening at http://exhibitiononscreen.com/find-a-screening/

Sydney Arts Guide has two double passes to give away to see CANALETTO : THE ART OF VENICE. Email the editor.sydneyartsguide@gmail.com with CANALETTO  PROMOTION in the subject heading.  The double passes apply to the  Palace Chauvel cinemas  and are to be used over the weekend  of the 15th to 17th July 2022. Winners will be advised by email.