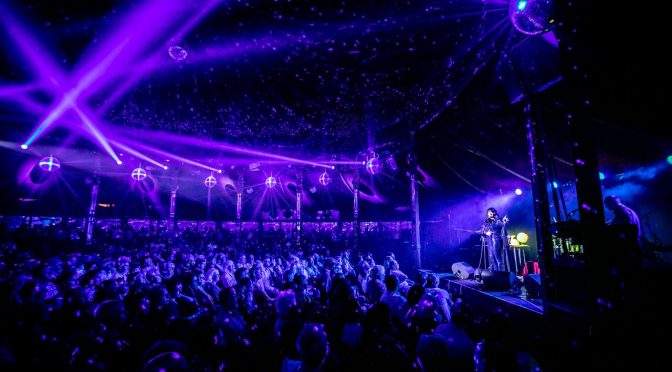 A bell tolls and Camille O’Sullivan steps from the audience onto the stage of the Magic Mirrors Spiegeltent in a shimmering self-made midnight blue/black cat suit topped with a black cape. From that moment this consummate performer holds the audience in her hand as she present, what she describes as a love letter to two of her heroes of music Leonard Cohen and David Bowie with added material from a variety of artists such as Nick Cave, PJ Harvey and Jacques Brel. The show itself is named after one of Bowie’s final singles.

In this 80 minute show O’Sullivan an Irish/French singer and storyteller-in-song, and her highly talented three piece supporting band of Feargal Colm Murray on piano, Paul John Byrne on drums and Steven Fraser on guitar, ask “Where are We Now”, in this turbulent, changing world in distress. Her strong, clear and passionate voice consumes the cabaret type space of the Spiegeltent as she turns each song into a theatrical performance.

The interpretations of the songs vary from dark and bittersweet narratives to loud explosions of music and movement with the disco balls flashing and turning in the lights. Her emotive and graphic hand movements both form a connection with her audience and also at times conduct the band.

During the first section of the show some of the songs are interspersed with audio recordings to help set the background but later in the show it is Camille who comments on the songs and their meanings for her. She particularly plays homage to Leonard Cohen performing some dark material and then ‘Anthem’ which she comments contains some of her favourite lyrics giving hope – “there is a crack, a crack in everything, the light gets in….” The Ship Song by Cave closes the main set and a final gentle Irish lullaby/love song allows us to leave feeling in a more settled mood.

This is an emotionally intense performance as O’Sullivan contemplates the woes of our world, tempered by love using a voice that varies from almost whisper to full on power.

CAMILLE O’SULLIVAN – WHERE ARE WE NOW ? Plays as part of the Sydney Festival  until January 13 at Magic Mirrors Spiegeltent, Festival Garden, Archibald Fountain, Hyde Park.