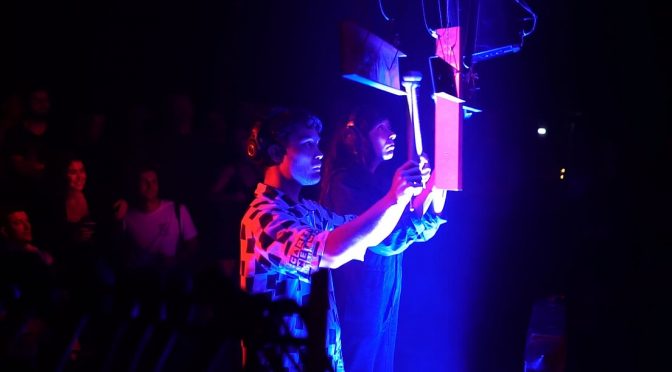 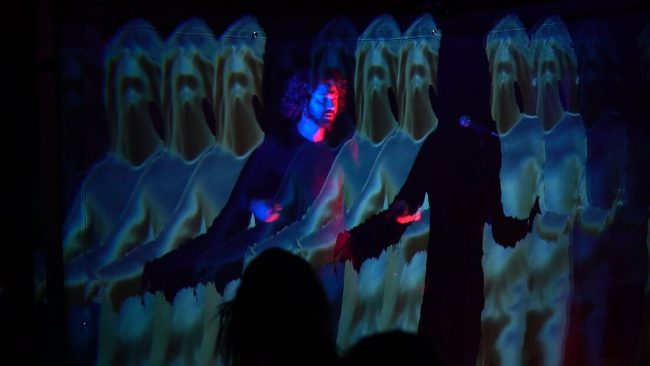 CALDERA was a night of fire and art in an industrial cathedral: burlesque performances, experimental music, cocktails and an art exhibition in a  reactivated blacksmiths’ forge.

Just in case you are like me and have no idea what it means, CALDERA is a cauldron-like volcanic feature usually formed by the collapse of land following a volcanic eruption.

Walking up to Eveleigh Locomotive Workshops in Redfern I could already see was a big line of people waiting in anticipation and excitement for what’s to come in this unusual and mysterious venue.

Having our tickets scanned, immediately we were given drink cards and were ushered to the bar to pick up a Four Pillars Gin Cocktail. What a great start! It was strong, potent and delicious.

As we followed the foot traffic we moved into the beginning of an experience and surroundings like no other. Industrial, dark and dirty, we start to roam around an area full of machinery.  I walked closer and started to notice a sorts of interactive artworks cleverly embedded in different sections of the workshop. Beautifully lit with red, green, pink and blue. My indecisive self started to kick in … I wanted to see all of the interesting works but didn’t know which direction to go first.

Suddenly I heard music and a beautiful operatic voice coming from the back of the workshop. I immediately asian-shuffled over to where everyone was gathering around. It was Tanzer … in shimmering black, a mysterious dark siren demanding our full attention.

Then behind us, appeared  burlesque performer Zelia Rose swaying and seducing us under a beaming red light. The audience cheered as she skillfully danced away her costume and waved  enormous striking feathers in a sexy routine.

I was visually mesmerized by drummer and electronic producer Alons Ilsar as he waved his Air Sticks – off the shelf gaming controllers.  Excitingly creating interesting experimental electronic sounds that simultaneously guided the wonderful geometric visuals projected onto an translucent screen in front of him.

The lights came on and lit up the 19 exceptional artworks which we were at liberty to freely roam around the workshop to discover, appreciate and interact with.

Blacksmith Matt Mewburn set up the forging furnace and started the power hammer as percussionist / composer Bree Van Reyk and together.  They created the most fascinating , riveting sounds … together definitely taking the pedal to the metal a different level. Followed by yet another spellbinding and captivating performance with Marcus Whale.

I have seen a variety of shows in 2018, It has been an exploding year  for theatre, creative arts and performance art in Sydney.  But this was special … the birth of Caldera was such an intoxicating, invigorating and inspiring event like no other. Well done to Director Laurence Rosier Staines for his mastery in making this magical dream come to life. I look forward to the next installment of this unique arts experiment.