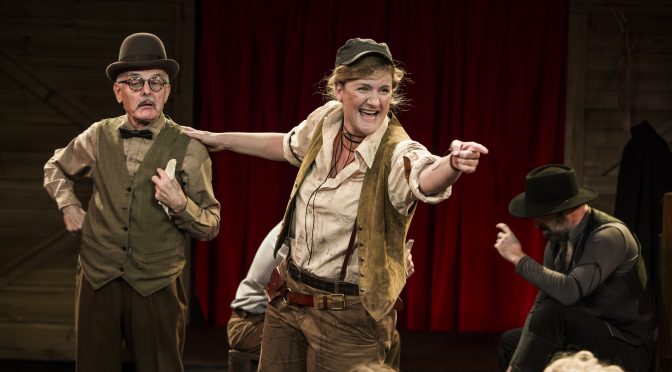 As fresh as a misty morning over the Dakota Black Hills,  this secretly slickly polished show feels as new as a greenhorn straight off the stagecoach.  Considering how long the company has been together, the vitality and vivacity of the cast is so astonishing, so engaging, so attractive that you get pulled into the world of the Golden Garter Saloon from before the show when the characters are wandering the auditorium.

This ensemble has a comforting, well-worn riding boot aesthetic and within that, they are let loose to explode a coating of dust and dirt over a golden nugget of a musical. It’s as exciting as a silver strike to see the sawdust and spit of this work. (Laura Bunting, Anthony Gooley, Sheridan Harbridge, Rob Johnson, Matthew Pearce,Tony Taylor).

And they all expertly call shotgun when Virginia Gay hurtles full force into the saloon.  This is a cast who are tuned in to each other with a contagious charm that audiences can’t help but respond too.  They are warm and responsive and the meta mingling of Deadwood and Belvoir is delicious in execution.

And when Calamity arrives, Gay has the instincts of a benevolent sociopath in choosing her audience targets … just hilarious in her interactions. She can pick ‘em! She can climb over ‘em and she can get ‘em where she wants them with wit and good will. And no swearing or abrasive content. And she can stand still … still enough for tumbleweeds to roll through…  waiting for us to catch up to her pinpoint comic timing.

These miscreants certainly raise the saloon roof but the show can also barrel down to gentle arrangements which showcase a love of the voice with an intimate few minutes of fine singing and superb delivery. (Musical Director: Nigel Ubrihien) This sequence is allied with staging of perfection (Richard Carroll, Director).  And the choreo throughout (Cameron Mitchell) is thrilling but subtle, not showy or alley oop.  But when they give Gay rein in the Windy City it’s a treat to savour.

CALAMITY JANE is a whipcrack over the head of the lead ox that will leave you in awe of the talent, skill and brio of this grimy ensemble. As they say in the show “you came here to see something you can’t always see”.  And so it is.  And I guarantee that you will stand for the ovation when your cheeky trip to the old west is through. 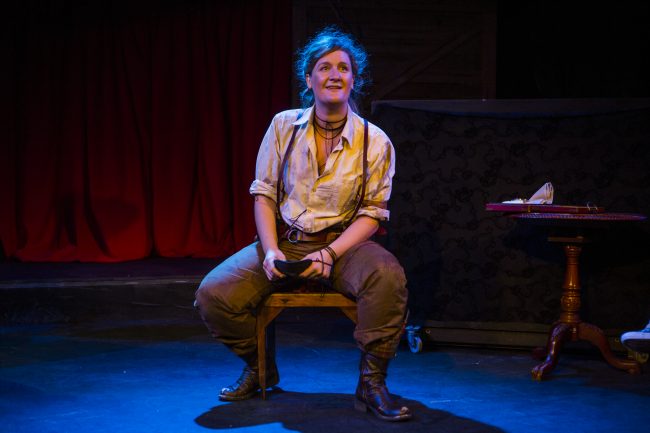