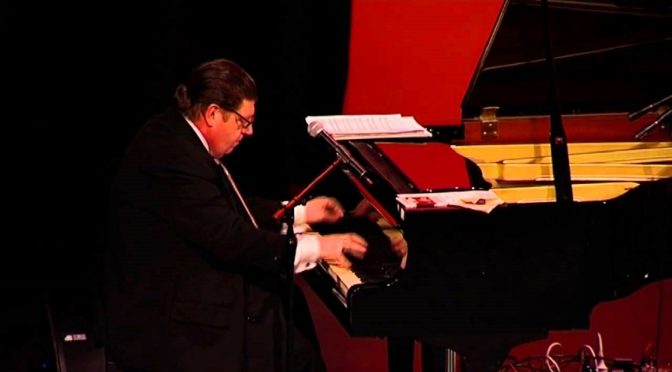 This first concert in this year’s delightful series and included music by Johann Strauss, Franz Lehár and Imre Kalman.

We were whisked to Vienna and heard classics such as The Blue Danube,and selections from Die Fledermaus, The Gypsy Baron, The Merry Widow, The Land of Smiles, Countess Maritza, The Gypsy Princess and works by Richard Tauber, Joseph Schmidt and others.

Amer opened the program with a very dynamic, infectious selection of famous waltzes. He placed the waltz in social context and remarked how scandalous it was when it was first performed, even raising t,he chagrin of certain bishops in Germany.

We heard about Richard Tauber’s rather dramatic life and Amer played a passionate, glittering medley of some of his works: Vienna, City of Dreams, Blue Danube, My Heart and I.

We were then introduced to the delightful Zoe Drummond, making her debut at the Gallery,  and looked stunning in a long red dress. She sang an enchanting Voices of Spring.

Under Amer’s guidance we then jumped to Vienna in 1874 and Strauss’ Die Fledermaus Amer and Drummond performed a witty pot-pourri of various songs from the operetta including Adele’s Laughing Song.

We next heard a darting, sparkling waltz from a rather obscure operetta called Rose of Stambul by Leo Fall. The piece featured captivating rhythms.

Then came an enchanting lyrical waltz from The Acrobats (Les Saltimbanques,) by Louis Ganne, This was followed by a wickedly seductive selection of melodies from The Gypsy Princess by Hungarian composer Emmerich Kálmán , full of swirling passion and fiery, spiky  chords and rhythms.

Next Amer and Drummond performed a selection from Richard Heuberger’s The Opera Ball (1898).

Then we jumped across the Channel with Drummond delivering a ravishing rendition of I Dreamt I Dwelt In Marble Halls that brought the house down. Amer countered with a terrific, vibrant rendition of You Are My Heart’s Delight from the operetta The Land of Smiles.

Nobody Could Love You More by Richard Tauber was followed by Meine Lippen, sie kussen so heiss (from the Lehar operetta Giuditta), Then there was a delightful rendition of My Hero from The Chocolate Soldier.

This led to a champagne finale – a  moving version of The Merry Widow waltz.

There was very warm applause and for an encore we heard Amer and Drummond in the enticing Are You Going to Dance?

Melvyn Morrow, Artistic Director of the Cabaret In The Day series then  came on stage and gave a brief preview of the upcoming two concerts, joined by Christopher Hamilton and Adele Johnston.

YOU ARE MY HEART’S DELIGHT played the Mosman Art Gallery on the 9th July.