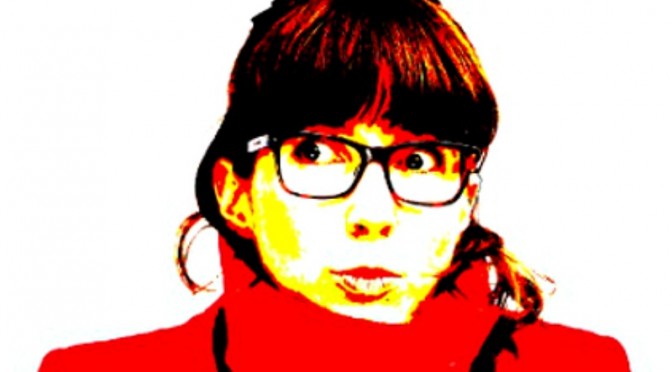 There’s a new comedy venue in town. It’s called  The Den, it’s in the Chippendale Hotel,  and  after seeing THE REALITY BANDIT WITH  C.J. Delling there last night, I’d say  it’s well worth a visit.

When you rock up to the venue the first thing you notice is a sign saying Under New Management. The food is good, generous, and very reasonable and there’s a good atmosphere. Then you descend stairs reminiscent of the Fitz Theatre and you discover a neat, comfortable little live venue. Then, right on time, (not always the case), the show starts. All good so far, but is this going to be another comedienne who thinks shock and poor taste equate to comedy or will there be something clever as well as funny? Yes, yes, YES!

Ms Denning’s unassuming, often self deprecating, sometimes disarming, always charming delivery is refreshing and funny.  Sure, a lot of comics tear themselves up on the altar of stand up and you laugh at their expense. But last night somehow you wanted to give her that hug she said she wanted at the same time. (She’s writing a book called “The Hug-a- sutra”!) .

C.J.  is a master of the story teller’s device of ‘shelving’, as Keith Johnstone termed it;  where you introduce an idea then leave it alone for a time only to reintroduce it later to the delight of the audience. Much of the routine was autobiographical.  We learned of a career as a Bondi Life Saver; she even modelled the distinctive red and yellow cap! She also managed to have a go at a few sacred cows including a deserved swipe at the British Museum for keeping artefacts “stolen from Greece and Egypt”. (I had to resist the urge to stand and cheer!) The show was informative as well as entertaining. (I never knew that life savers would apply sunscreen lotion to one’s hairy back! – Can’t wait ‘til Summer!)

If there was one negative thing to pick, and I am stretching here, the delivery was a little stilted on just one or two occasions. But I really just mention that so as not to seem too one eyed. In fact it probably just added to her charm.

I’m always pleasantly surprised and impressed when a single performer with only her warm personality and a couple of props can hold an audience easily for an hour and leave us wanting more.

Watch for her next show!

REALITY BANDIT played the Den @ the Chippendale Hotel, 87 to 91 Abercrombie Street, Chippendale on the 13th and 14th September as part of the Sydney Fringe Festival.

One thought on “C.J.Delling in Reality Bandit”