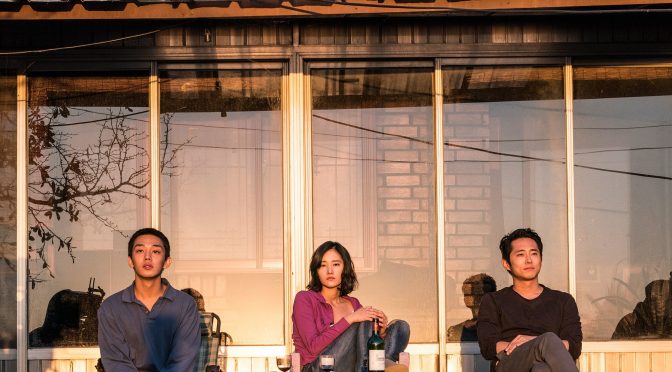 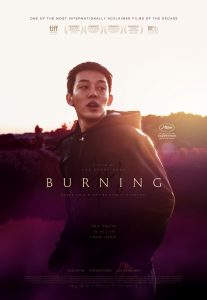 Where’s there’s smoke there’s fire and there’s plenty of smoke and a slow burn of mysterious ambiguity in BURNING, that threatens to ignite but never quite reaches kindling point.

Hardly a barnstorming film, the film maker takes a short story and makes a long film, nearly two and half hours duration, a running time that stalls to a walking time, and proves a smidge too far.

Filaments of Faulkner and F. Scott Fitzgerald run through BURNING but it’s Gatsby that predominates in the sound and fury.

Ah-In Yoo plays Jongsu, a wannabe writer who hooks up with Haemi, played by Jong-Seo Jun.

Haemi is a model and mime who knew Jongsu when they were kids. Back then, Jongsu told her bare faced, point blank, that she was ugly. In the intervening years, she tells him she has had cosmetic surgery.

Is it the truth or a lie, an elaborate illusion, like her perfected mime?

“You’re pretty talented,” he tells her. “This? It’s easy. It has nothing to do with talent. What you do isn’t make yourself believe that there are tangerines there. You forget that the tangerines are not there. That’s all.” she says.

She then returns with a boyfriend in tow, Ben, played in laid back playboy mode by Steven Yeun. And then she disappears, seemingly vanishing into thin air.

Gradually the sense of reality is sucked right out of everything around Jongsu, with tasting notes of abduction, arson, and grievous bloody assault.

If nothing else, BURNING will probably prompt you to read the source material, a good exercise in discovery of Murakami’s work and the mechanics of adaptation from one form of art to another.
.