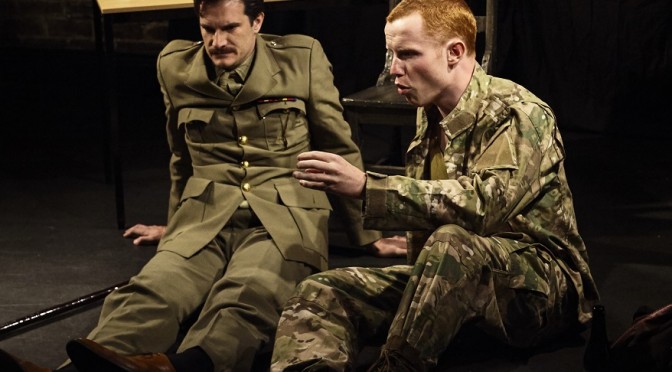 A Night of Play is currently presenting the Australian premiere production of BULLY BOY by playwright Sandi Toksvig. BULLY BOY embodies all the brutal reality and tragedy of a soldier’s life under investigation for committing murder on the battlefield in Afghanistan, by killing an enemy combatant, an eight year old boy carrying a grenade. Jaymie Knight is Major Oscar Hadley, the army investigator. Patrick Cullen is Private Eddie Clark, the frontline soldier, a member of the battlefield team known as THE BULLY BOYS.

Truth is never a part of a wartime murder investigation, and the army investigator is not at anytime interested in serving the truth. History is always re-written by the winners to mirror the required point of view. As expected the army has already decided that Private Eddie Clark is guilty, and has to be the scapegoat. The damage done to all sides is very evident, war is hell, and in modern warfare, all ethical standards disappear.

Director Deborah Mulhall has applied her unique and meticulous vision, to the two characters in crisis. This play required an intimate performance space, and the director achieved that intimacy by converting the whole of the theatre area into a thrust stage, with the audience seated on three sides, on the front of the stage as well stage-left and stage-right.

Private Edward Clark is shattered inside and PTSD is evident, and quickly learn about Eddie’s fragile mental health. He has stayed alive, survived and with no physical injuries, but with complete loss of impulse control. Learning about Major Oscar Hadley’s fragile mental health caused by the Falklands War, causes a meeting of minds and a bond is formed between the officer and the soldier.

The whole truth, should not be buried. Unexpected twists bring the play to a unique conclusion, that makes you consider that warfare is never ever justified. Corporal punishment and capital punishment, simply does not work. When will the seven billion humans decide that permanent peaceful co-existence, is the only way to live? Duration of ninety minutes including ten minute interval.

Sandi Toksvig’s BULLY BOY is playing the Blood Moon Theatre at the World Bar, 24 Bayswater Road, King Cross, until the 26th March. Performances are Thursdays, Fridays, and Saturdays at 7.30pm. Age restrictions apply at this venue, and you must be 18+ to attend