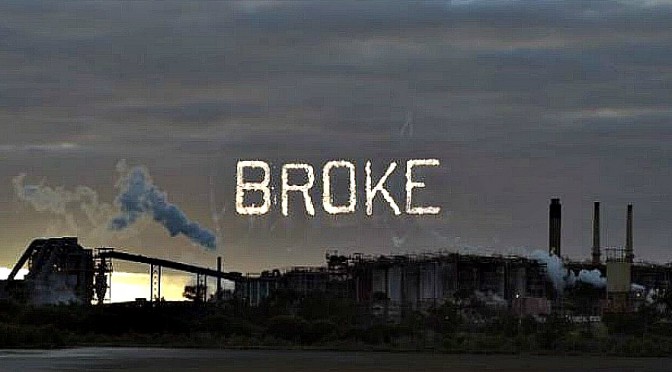 Go for BROKE. It’s a bewdy.

Shot on a shoestring budget, BROKE is a movie that has the integrity and self worth of being brought up by its bootstraps.

One night, flat on his back broke, boozed dull with wine cask bladder empty, Ben is picked up by Good Samaritan, Cec, and offered a feed. Ben suspects Cec of wanting sexual gratification in return. He’s a pie man not a sausage roll sucker, says he to Cec.But old Cec, a recycling garbo truck driver by trade, with a personal credo of taking trash and revitalising it, has set his sights on rehabilitating the former champ. Further to the feed, he offers the homeless former football hero shelter at the home he shares with his single mother daughter, Terri, a fellow footy tragic.

Ben breaks faith by nicking a bunch of stuff from the house, but Cec and Terri offer a second chance as long as he attends a Gambler’s Anonymous programme and starts to pull his socks up.

Written and directed by Heath Davis, BROKE looks at the flip side of fame and how blokes brought up only knowing footy, never having any other job, can crumble after the career takes a dive.

Steve Le Marquand is terrific as the down and out Ben, a wretched result of the recent type of footballer who has known no other life than the club and the field, who has experienced adulation and reward that has fostered arrogance and irresponsibility.

Max Cullen imbues Cec with a stoic sadness, spurred by the substance abuse death of his son, himself a promising athlete before an accident smashed his potential and sent him on a spiral of self destruction. Already supportive of his daughter and her child, he sees Ben as a surrogate son, a second chance for his perceived failure at fatherhood with his deceased son.

As Terri, Claire van Der Boom is sensational as the star struck tragic, an irresistible blend of impressionable ingenue and no bullshit savvy.

Pippa Grandison is a scene stealer or two as a restaurant manager who has history with Ben and offers him a job as a dish pig.

“Don’t give up on me”, is the plaintiff cry from Ben when things start to turn around for him. “Don’t give up on yourself” is the tough love response from his supporters. It’s a mantra that runs through the core of this fine film.

BROKE ain’t, but it needs fixing. It needs and deserves a fixed exhibition run instead of the haphazard one night stand screenings it has secured. BROKE ain’t broke, it’s a bloody little gem, funny as buggery, seriously moving, that runs a bullshit cutting swathe through so much of the tripe clogging up the screens today, a lot of which is alien because it is not human.

BROKE connects because it has the smell of living, the small wonder of living, and is neither sentimental or squalid, just social.

A small film with a grand vision writ large. Hope you’re fixing to see it.

Details of screenings can be found at http://www.brokethefilm.net/