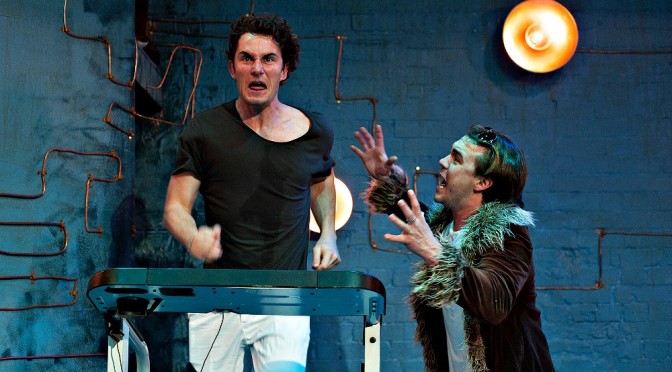 MEN, playing at the Old Fitz, is about trust. Trust has nothing to do with the story actually but it’s what might keep you in your seat. Germaine Greer said that women don’t really know how much men hate them but many woman trust that Germaine is wrong… that our brothers and husbands and nephews, men of our acquaintance, men we share a bus with and so on don’t see us like that.

I trust playwright Brendan Cowell.  He is an internationally recognized writer of TV and theatre who has won awards and nominations for his work.  He crafts work of considerable intellectual reach to challenge an audience and to drag them through a world of his creation.  The gynophobia hits early in this show and my decision to stay was all about trusting that the wordsmith was taking me to a place of redemption where I could forgive the misogynist arseholes who populate the stage.

Those men are Jules, Crazy Bob and Guy.  The setting is an unnamed place: possibly a basement gym, perhaps a mouldy waiting room.  It’s a green room not the “grey empty room” of the text.  Wherever they are, these men are comfortable there and fear the outside.  The disembodied female voice of Haizel alerts them, through the intercom, to time running out before an event which will take them out there.  For what have they been preparing for 5 years?

They are very different to each other yet all are hyper-masculinized around bodies and sex.  There is a manufactured quality to their existence … surely they can’t be real.  They must be parts of one man: the violent; the fantasist; the self medicator who feels too deeply.  Or are they sections of one segment of what a man is?  Are they women acting out what they think men who hate them do when not overseen?  What are they and why do they think this behaviour and hate speech is OK?

Jules is the character who appears to be the most on track and Sean Hawkins brings an authority to him.  Hawkins clearly lets us see a man who is driven and focused yet capable of seeing himself from the outside.  His choice to allow for slippage of that façade nicely facilitates Jules’ verbal horror at his own violence and the audience’s reading of a slight pride in his accomplishment.

Crazy Bob, in his wifebeater Tee, is frenetically brought to life by Ben O’Toole.  His constant motion unless he is standing still against a wall, worn out, impels his dialogue and there is so much sound and fury that his decay into admitting a fantasy life drops like a free weight on an unprotected floor.

Guy, by name alone, must be an everyman and Jamie Timony manages the delicate acting task of being whacked out yet intelligible.  His Guy is a guy who sees what the audience believes might be going on and recoils from it in acts of self-destruction.  Timony is never mawkish or over the top, instead he is pathetic and outlandish and frozen in a cycle of despair.

Haizel (Cheree Cassidy) makes an appearance late in the piece, perhaps as the humanising influence.  It’s a difficult task to flesh the voice and make the character powerful in real life and I didn’t quite get that from Cassidy.  But I did understand the need for some blandness, given that all 3 men have endowed Haizel’s voice with whatever they want.  She certainly has their measure and the play becomes a lot less aggressive and loud as she leads them to the climax.

Director Jessica Tuckwell has managed to keep a lid on the worst excesses that a show like this could become and it is not overwhelmingly cacophonous. Nor does she allow the inherently abusive nature of the action to become completely alienating.  Once you have given yourself permission to take Cowell’s trip, there are some very funny lines and this craft is part of the trust.

And the payoff?  Do the womenhaters get their just desserts?  It’s unclear but they must have.  I only say this because I left content and not angry or raging.  Cowell gives just enough resolution that an audience gets where in these men that their vicious unpleasantness resides and why, male or female, we can justify staying in our seat.

MEN is playing at The Old Fitz Theatre until Saturday 25th July.