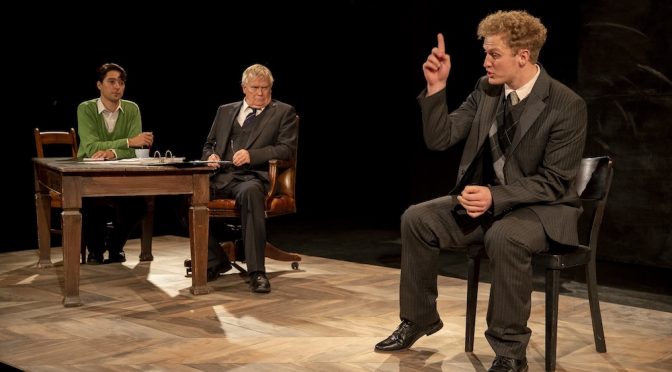 The new play at the New Theatre in Newtown is a revival of British playwright’s Hugh Whitemore’s 1986 play BREAKING THE CODE directed by Anthony Skuse.

There is a double meaning to the title of Whitemore’s fine play. Professor of Mathematics Alan Turing is best known for his work, no doubt with the help of colleagues, in breaking Enigma, the Nazi’s very complex military code. This was a large contributing factor to the Allies winning the Second World War. Many will know this story from the 2014 film The Imitation Game directed by Morten Tydum and starring Benedict Cumberbatch.

There is, however, a whole other less well known story, which is the focus of this play. Turing was openly homosexual at a time when homosexuality was still a crime in Great Britain which potentially could result in a prison sentence.

The play pivots around a scene where Detective Sergeant Rimmer interviews Turing after he contacted the police and reported a break-in that took place at his home. After extensive probing Turing admitted he had sex with a guy called Ron whom he believed was responsible for the burglary as he had previously taken money out of  his wallet whilst staying with him.

With this admission, for want of a better word, Turing had broken an unwritten  code. This was the  code of silence that homesexuals at the time lived by. They lived out their lives cloaked in privacy and secrecy, knowing that if the truth came out, their very liberty could be taken away from them. Such a terrible, insecure way to live their live!. Not much, in fact, nothing had changed from the time when the brilliant Oscar Wilde had spent a long time in incarceration.

Turing’s life was never the same after the admission. Detective Sergeant Rimmer was a by the book police officer and he told Turing that he would be charged with a criminal offence and have to appear before court. It was a humiliation for Turing who lived in such elite circles and whom Prime Minister Winston Churchill held in the highest regard.

Very experienced director Anthony Skuse helmed this revival of Whitemore’s play. He maintained the dramatic tension throughout. Sometimes I felt that the production was a bit  too busy.

I enjoyed the use of actors/characters  being on the outskirts of the stage, observing the action and sometimes participating in it. There were also a few women seated by the stage who beautifully, and heartbreakingly, sang extracts of popular songs.

A quibble I had about the production was the use of a multimedia screen at the back of the stage. Through the show various videos were played. I and the friend I went to had absolutely no idea what these videos were meant to mean! Oh well…it just went over our heads! Maybe it is a case of the director just being too clever and complicating things. In my opinion the themes of the play came through very clearly without the need of multimedia.

The performances were, on the whole, first class as is often the case with productions at the New Theatre. Steve Corner was excellent as Alan Turing as was Ewen Peddley and Harry Reid as the younger Turings. Jason Jefferies was sufficiently creepy as the by the book Detective Rimmer. Leilani Loau and Jess Vince Moin played Turing’s troubled mum Sara at different times in his life. Igor Bulanov played the dishonorable Ron. Dallas Readman was  good in two rules, as Turing’s close friend Christopher Morcom and Nikos, one of Turing’s love/lust interest. John Grinston played John Smith, Turing’s candid, caring boss, John Smith.Bridget Haberecht played Turing’s work colleague Pat Green who feels more than friendship for Turing. Naomi Beler and Martin Portus completed the cast.

This production is well worth seeing and a good choice for a play as part of the Mardi Gras Festival season of plays. It is a reminder of how not so long ago people were not, on a very crucial, basic level, not able to live authentic lives. And how good it is that under Malcolm Turnbull’s government Australians voted for the same sex marriage plebiscite and it was passed into law.