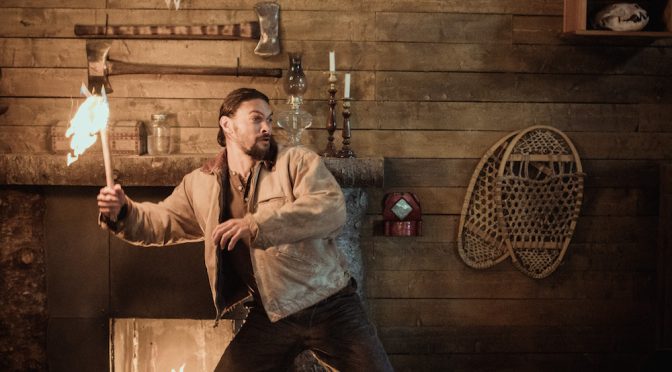 Soon to create cinematic waves as Aquaman, Jason Mamoa is dishing out derring-do on digital and DVD in the truth in advertising action adventure drama, BRAVEN.

Mamoa plays Joe Braven, happily married lumberjack, adoring dad to a daughter, and concerned son for his mentally deteriorating dad. Dad’s been presenting some disturbing anti social behaviours so Joe suggests taking his sire up the mountain for some quiet, quality time.

When Joe Braven and his father arrive at their remote hunting cabin, they find a stash of heroin, hidden in the cabin by drug traffickers. When the criminals suddenly return, Joe and his father must make a kill-or-be-killed stand for survival.

Directed by former stuntman, Lin Oeding, BRAVEN is like a wild ride amalgam of The Waltons and Rambo, with aw-shucks folksy sentiment coupled with awe shocks action and the breath taking scenery of Nova Scotia.

Dillahunt is especially impressive as the cold blooded Kassen, a movie villain that captures the charisma and the coolness of the best of that ilk.

Jill Wagner chimes in as Braven’s brave kick ass wife, Stephanie, eschewing her outward soccer mom persona with an impressive bow sending the drug cartel goons all a quiver with her archery prowess.

But it’s Mamoa who is the man in name and deed in BRAVEN, ratcheting up the Ramboesque rambunctiousness in a plausible and entertaining manner.

If you’re after an actioner that delivers resilience in spades, BRAVEN is what you’re cravin’.