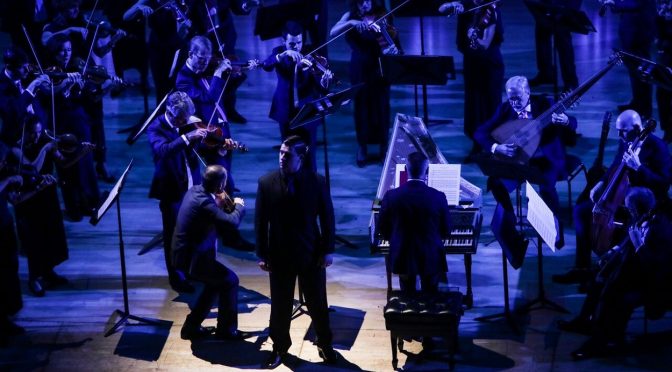 A most glorious concert that had the packed house enraptured, The Australian Brandenburg Orchestra ( in double string orchestra format)and Choir combined forces to perform a richly textured dramatic concert that ranged over 400 years in an English musical journey mostly concentrating on works by Tallis, Byrd, Gibbons, Locke, Purcell, and Handel but concluding with a 20th century piece Ralph Vaughan Williams’ Fantasia on a theme by Thomas Tallis. They were enthusiastically and energetically conducted by Paul Dyer.

Featured guest artist is the extraordinary counter tenor Max Riebl . Riebl is a soloist with an impressive repertoire, performing in Sydney’s City Recital Hall, the Melbourne Recital Centre and Hamer Hall, the Forum, the Vienna Musikverein and the Royal Albert Hall, Max studied baroque and early music at the Schola Cantorum Basiliensis with Gerd Turk, a renowned German classical tenor.He is much in demand and has performed with the ABO to great acclaim previously.

The first half of the concert was crammed with many musical gems mostly written for the court of Elizabeth 1 .

It opened briskly with the very demanding Prelude in G major by Gibbons – a bright rippling organ solo by Heidi Jones. Byrd’s Ave verum corpus pulsated and throbbed with the choir’s voices floating and soaring .Gibbon’s Drop drop slow tears in the instrumental version ( we also heard the vocal version ) swirled in a melancholy lament .we first heard special guest artist counter tenor Max Riebl in The Silver Swan – he was charismatic and with a thrilling clear tone. Great House of Lords and Hossanna to the Son of David were enthusiastically performed b the choir with a bright joyous feel and a stirring Amen.

Purcell’s darting Overture and Rondeau from Abdelazer was next with its stormy opening,strident violins and rumbling double bass.Then followed a major highlight of the concert – a chilling hypnotic performance of the Cold Song from Purcell’s King Arthur by Riebl – you could hear the tramp of the marching feet in the snow with the shivering strings .Riebl was extraordinary in a very strong performance full of vocal fireworks . By contrast his Fammi combattere from Handel’s Orlando, HMV 31 with its fast staccato rhythms and shimmering violins bubbled exuberantly and was also another bravura showcase for his amazing technical control.

We also heard the Largo & II Allegro from Handel’s Concerto Grosso, Op. 6/7: which was very fast bright and flowing and played with wonderful phrasing and timing by the Orchestra who created a rich warm tone for this piece.

The second half began with Locke’s Curtain tune from The Tempest which began with striking ominous strings and alternated between a lyrical lament and exuberance.

The choir joined and performed a wistful ,poignant song by Tallis If ye love me which was followed by a soaring angelic Agnus dei from Missa puer natus est nobis also by Tallis .The counterpoint and harmonies were sublime. The Why fumeth in sight from Tunes for Archbishop Parker’s Psalter also by Tallis sizzled and surged with its brisk, cascading rhythms.

The final work was Vaughan Williams Fantasia on a theme by Thomas Tallis with some of the orchestral in the middle balcony. The smaller chamber orchestra is juxtaposed with the sounds of the larger full string orchestra on the main stage and there are mini solos – for example Shaun Lee-Chen on plaintive violin.There was fabulous intense ensemble playing of this meandering but luscious and fluidly passionate work.

A remarkable concert and there was much thunderous applause at the conclusion .The audience was left wanting an encore.