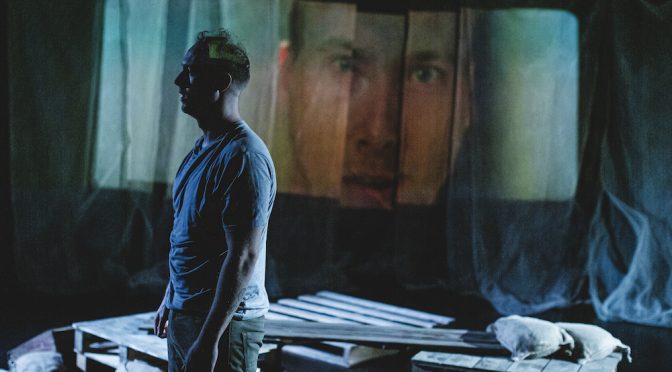 BORDERLESS is a masterful monologue aided by excellent stage craft.  Writer and performer Peter-William Jamieson began researching the play after talking to a friend who had returned from a tour of duty in Afghanistan. The result is an 85 minute solo performance performed by Peter and produced by the Street Kid Collective.  The play won the International Script and Storyboard Showcase and was shortlisted for the 2020 Rodney Seaborn Playwrights Award.

BORDERLESS is the story of two step-brothers, Blake and Hussan, who join the Australian Army to fight the Taliban. Hussan came to Australia as a child refugee with his mother, who then married Blake’s father. The story is told by Blake.

It is a long-overdue telling of the long standing problem in the Military, that of soldier suicide. Early in the piece Blake speaks of the 700 suicides of Australian soldiers returning from the Iraq and Afghan wars, compared to the 46 soldiers killed in those battles. From that point on we suspect how the play will end. But that doesn’t diminish from the story as we follow Blake’s angst through the war, his return to Australia, his battle with drugs and his attempt to return to ‘normal’ life.

The work doesn’t threaten the audience because we are observers. We don’t get involved as the character Blake because the action is fast, moving from one scenario and one intense mood to another in quick time. We understand the traumas but we don’t become traumatised. Given the heavy topic, that is perhaps the better way to present BORDERLESS.

We don’t want the audience to run away from the issue. Quite the opposite. It’s a subject that needs airing.

Peter has written an important story and performed it powerfully. He easily transitions from the caring brother, enthusiastic recruit, tired soldier, desperate survivor and struggling  civilian. Peter is a brilliant actor. He’s big. He’s physical. He’s sometimes shy and gentle, at times brutal and brittle. He transitions from one to another seamlessly and believably.

The production team has crafted an outstanding theatre work. Christie Koppe is the director. Dan Ampuero’s stage design makes excellent use of the large open space, providing the clever props and areas that become a fishing boat, bunkers, house, barracks and other spaces. Congratulations to sound designer and composer Hal Rees and to Michael Yore for the sound and visuals. The intense battle scene effects were contrasted magically with the gentle moods of the loving family. The night in the Afghan valley was subtle but powerful.

As a monologue, you don’t feel as if you’re alone with Blake because of the clever use of  semi-tranparent overlapping drapes upstage which the character can walk behind. There are also earlier-recorded projections on the back. At several points Blake sits in front of a camera and his image is projected on the drapes from that camera. This was a distraction because the words on the screen were out of time-synch with Blake’s live words.

The Chippen Street Theatre is a good space for small to medium productions. Good acoustics, excellent sound and light systems, plenty of nearby street parking and close to the city.

BORDERLESS is now at the end of a short season at Chippen Street. Hopefully it will move on to other venues, other cities and overseas. It deserves to be seen again and again.