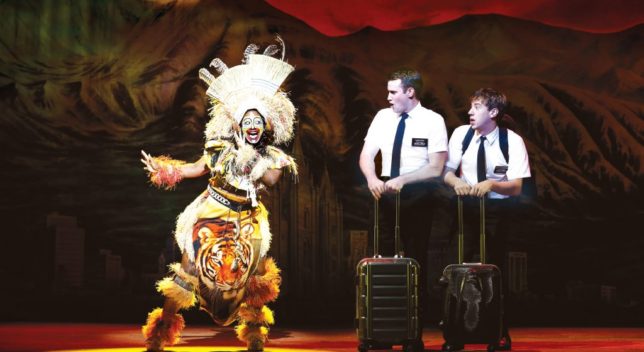 The Mormons have arrived! It is rare for a musical to open with such high expectations and it lives up to the hype . Created and directed by the team behind South Park – Trey Parker and Matt Stone – there are many layers of meaning . There is lots of strong language , some of it is rude, lewd and could offend but it is a darkly humorous and satirical examination and critique of our contemporary world brilliantly staged with a tremendous cast.

THE BOOK OF MORMON lambastes our society and beliefs, insisting we can do better, and raises issues such as religion’s inescapably oppressive and at times inflexible structure, and the severe problem of poverty in developing countries.

To very simply sum up the plot – Directly after their training, two young Mormon men , Elders Price and Cunningham , are dispatched from Salt Lake City in America to Uganda, to spread the word of their Mormon church.

Once in Uganda it immediately becomes clear that their mission will be more difficult than they’d thought — the village they’re delegated to is controlled by a menacing warlord, and almost everyone has AIDS.

Elder Price ( Canadian Ryan Bondy ) is presented as a luminous example of preppy ,polite ,squeaky clean, edgy yet narcissistic Mormonism. Devoted to the Bible , great things are expected of this Mormon golden boy. In contrast lying, tubby Elder Cunningham ( American A .J .Holmes ) is dorky, clumsy,, bumbling ,ornery and somewhat a loner,  seeking a friend. He is always optimistic. It’s another take on the odd couple /fish out of water/opposites story.

Both characters change greatly over the show; Price learning to think more about others and realising Cunningham ‘can do something incredible’ .Price’s nightmare (Spooky Mormon Hell Dream) with its devils , Satan with a sizzling electric guitar etc is actually rather scary and extremely well done. Cunningham meanwhile grows in confidence and falls in love with Nabulungi.

The leader of the mission in Uganda Elder McKinley is deliciously played by Rowan Witt as a closeted, flamboyant homosexual who has much fun stealing the show with a Gershwin tribute style number “Turn It Off’. ‘Don’t feel those feelings – hold them in instead!’ with a whole lot of tap dancing elders as if for a Mardi Gras float.

Important Village elder Mafala is imposingly played by Bert Labonte. .His much loved daughter Nabulungi is wonderfully played by Zahra Newman who has an incredible voice both for sweet ballads and stronger when necessary. Nabulungi’s and Elder Cunningham’s blossoming relationship (lots of double entendres in Baptise Me ) is the closest this musical comes to a standard stage romance and Newman is endearing and appealing with her wide eyed innocence especially given the squalor of the village.

Musical theatre fans will enjoy the nods to Les Miserables, The Lion King ,The Sound of Music, The King and I and other Broadway shows. The show also features Star Wars ,Star Trek and Lord of the Rings sly allusions/references.

From a feminist perspective , the show is presented from a WASP point of view focusing on Price and Cunningham. Woman (as exemplified by the strong , feisty Nabulungi) is seen as ‘exotic’ and ‘other’.

The large, mostly Australian, ensemble as led by the imported leads for Price and Cunningham who were magnificent and polished , exuberantly full of energy.

The staging of THE BOOK OF MORMON is slick and magnificent. Scott Pask’s set designs are glorious , moving fluidly from Salt Lake City, to Orlando , to an airport and Uganda for instance. One noticed the many layers and different textures of the village in Uganda. Anne Roth’s costume designs range from angels, devils and 18th century outfits to portraying the poverty of the Ugandan villagers who are clad in assorted mismatched items that seem to have been salvaged from charity bins. Brian MacDevitt’s lighting was an excellent compliment to this.

The orchestra as led by David Young was splendid.
Crisply , lavishly staged this will polarise audiences and give rise to much discussion about faith and world issues . It will inspire you to try and do good and make the world a better place – at least for the time being.

THE BOOK OF MORMON THE MUSICAL runs at the Lyric Theatre 28 February – currently selling through until 12 August 2018.