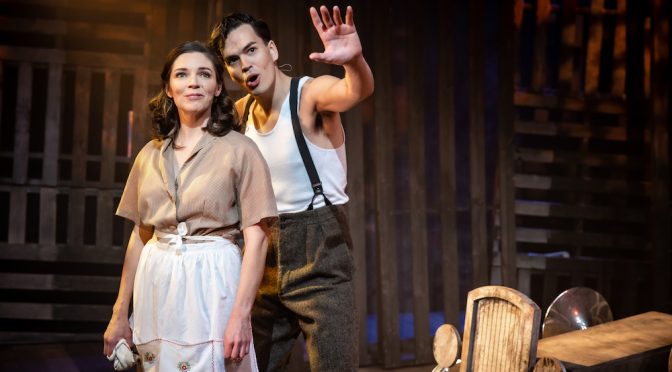 It seems that no musical can open without the words the musical added on to the title. At the Hayes Theatre we had the adventurous American Psycho The Musical, we currently have the superb Mary Poppins The Musical and what is one of Australia’s greatest musicals, Muriels Wedding The Musical. In the next month or so the Hayes  Theatre will be putting on Jekyll and Hyde The Musical, coincidentally written by the same composer Frank Wildhorn, who also wrote the music for Bonnie and Clyde The Musical.

The producer of the show Joshua had to overcome a number of challenges to mount this production.

First and foremost was Covid 19. The show was originally set down to open in 2019. As the pandemic raged opening dates were pushed back until now.

In that time cast changes had to be made and when the Director Sam Hooper visited the show’s writer Ivan Menchall script changes were made so what we have is a freshly minted production  for Sydney.

With lyrics by Don Black and music by Frank Wildhorn, Bonnie and Clyde is a heady mixture of haunting solos, wonderfully harmonious duets and glorious, soulful gospel music.

The story is well known where a murderous couple roam through the south of America until they are gunned down in their car in a hail of bullets, which is in fact the show’s opening scene.

Blake Appelqvist is sensational as Clyde Barrow. They fling their body around the stage and onto the floor as if possessed by demons inside them, all the while singing beautifully and powerfully. With matinee idol good looks, and a slight quiff in their hair they reminded me of a pulsating young Elvis.

Teagan Wouters as Bonnie Parker gives a less showy but tenderly nuanced performance as she transitions from an innocent country shop girl to become the murderous ally of Clyde.

Both characters have stars in their eyes; she believes that she can be a Hollywood starlet and he believes that he can be as famous as Billy The Kidd or Al Capone. this is a stark representation of the way in which  the American Dream is perverted when mixed with unrealistic expectations and unlimited access to guns and rifles. Whilst I think the production team were interested in their descent into psychopathy, I believe it also is an indirect commentary on the mass shootings that take place on an almost on a daily basis in the USA.

However, they are aided in their analysis of the couple’s self destruction in that Bonnie’s published poems and Clyde’s letters are included as part of the script.

The supporting cast are excellent and versatile with several playing multiple roles.

Particular mention must be made of Kieran McGrath as Marvin ‘Buck’ Barrow who like a puppy dog follows his brother to his death.

Blanche Barrow, his despairing wife, who  desperately tries to keep Buck from crime is sympathetically and heartbreakingly played by Milo Hartill, who is aided by  a sonorous, honey dipped, splendid voice. Some of us who watch commercial television. may have seen a sweet Milo in a Google advertisement doing the shopping for her frail Asian neighbour.

Further mention must be made of William Motunuu as the preacher who leads the ensemble in a couple of lovely gospel numbers leading the pack with a powerful baritone voice.

Hooper is aided in his task by a marvellously adaptable set design by Simon Greer and sound design by David Grigg.

Particularly effective was the lighting design by James Wallis whose dramatic spotlighting effectively either indicated a change in scene or allowed the carrying onto or the taking away from the simple but appropriate props. An example is a bed with car seats propped behind the bedhead with the engine represented by a coffin shaped cardboard box with headlights derived from large stage lights.

The Hayes Theatre does a magnificent job in launching  virtually unknown cast and crew into mainstream theatre.

It also does a sterling job in bringing to Sydney little known or off Broadway musicals that are like rubies setting off diamond blockbusters.

This gem has been thoughtfully extracted from the great American theatrical history and polished into a glittering production that is hugely entertaining and highly recommended.

BONNIE AND CLYDE THE MUSICAL is currently playing the Hayes Theatre.  featured