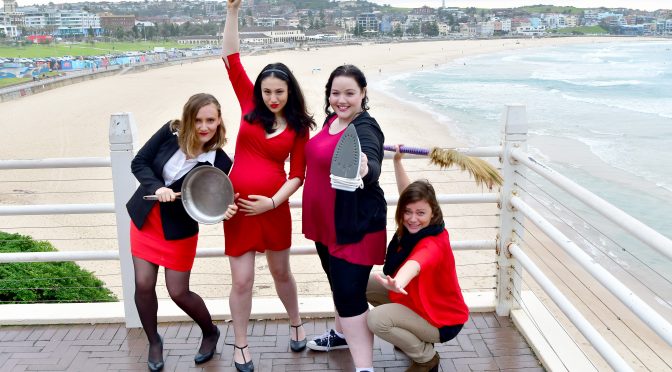 The inaugural  Bondi Theatre Company will present its debut season of musicals and cabaret takes places between August 17 and 26 and Sydney Arts Guide has two double passes to offer to its main production.

In MOTHERHOOD THE MUSICAL Amy (Rebecca Spicer) is three weeks away from giving birth to her first baby and is on cloud nine. Her friends Barb – a stressed out mother of five (Christie Koppe), Brooke – a hard working lawyer (Manon Gunderson-Briggs) and Tasha – a single mother (Chloe Angel) call a surprise baby shower to set her straight about the challenges that lie ahead.

The musical comedy by Sue Fabisch was described by Arts Hub as “a hoot”, “laugh out loud funny” by Broadway World and  “An entertaining night of chuckles and tears.”  by Variety.

The songs include ‘Baby Weight Blues’, ‘In My Mini-van’ and “The Kids are Finally Asleep’ and ‘I’m a Costco Queen’.

DATES FOR THE DIARY

MOTHERHOOD THE MUSICAL Plays between 17-26 August.

This musical is being staged alongside four cabaret acts.

Short and Sweet champion Sam Anderson takes you on an intimate journey to a “spin class” where the instructor “over shares” lost loves and confusion and green juice recipes.

DATES FOR THE DIARY

Cycology is a cabaret journey inside the mind of American composer Cy Coleman the man behind the music ofSweet Charity, City of Angels, Barnum and other Tony-winning musicals.Written by and starring Richard Woodhouse.

This is cabaret artist, musical writer and songwriter Joanna Weinberg delightful cabaret dedicated to the love of handbags.

Sydney Arts Guide has two double passes to give away to the preview performance of MOTHERHOOD THE MUSICAL on 17th August at 7pm. Email the editor on editor.sydneyartsguide@gmail.com. The winners will be advised by email.