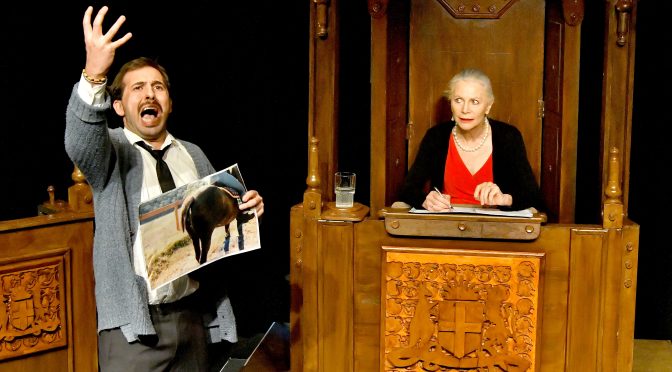 In Tony Laumberg’s BONDI LEGAL a young, inexperienced lawyer finds himself up against it. Brad Pitt, yes that’s his name, attends as a locum to a Bondi legal practice as boss Frank  Bailey has taken the week off to take a holiday up north.

Frances Denyer turns up at the practice saying that she has a hearing on at the local court   Brad rings up Frank and asks him  if this is correct. Frank  tells him that he thought that the  hearing had been postponed. He tells Brad to go to court, ask for an adjournment, and everything will be all right.

Brad is terrified of going to court. He has only just started practicing as a lawyer and has no court experience. He and his client Frances go off to court praying that they will get an adjournment.

The case, based on a case that Tony Laumberg ran soon after after he commenced his legal practice, involved a young woman who had a show pony that competed in Royal Shows around Australia. Just   before the Royal Sydney show her daughter applied a spray to her pony to improve its lustre but within hours the horse was covered in a rash and its tail and mane had fallen out. The  mother and daughter want their day in court seeking compensation.

At court they meet the pompous lawyer for the other side, hard nosed  lawyer Simon Crookwell. Brad is flustered and speads his  documents everywhere. Magistrate Newman comes on the bench and Brad asks for an adjournment. After a brief discussion, the no nonsense Magistrate refuses the adjournment and tells the parties that she will go off the bench for fifteen minutes and then she will come back on and start the hearing.  Brad is beside himself with stress. How will Brad and his client Frances survive their day in court?!

Valentino Arico gets a lots of laugh as Brad’s gruff boss Frank and also plays the various witnesses who come before the court.

A very funny, light hearted night at the theatre, Tony Laumberg’s BONDI LEGAL is playing the theatre at the Bondi Pavilion on various dates between Friday 11 October and Saturday 26 October with  ten performances in all. For more information and bookings visit www.bonditheatrecompany.com.au