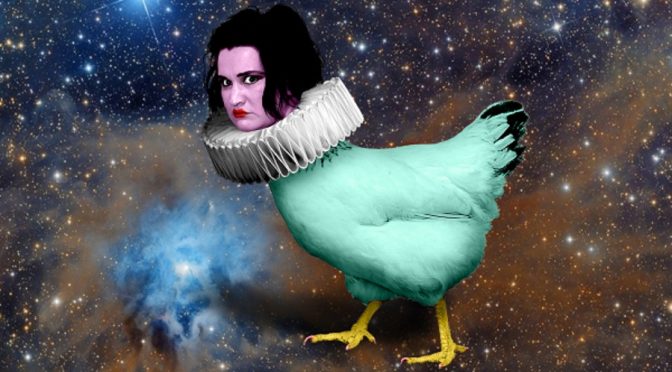 The Choo Choo Troupe is obviously a force for good.  They describe themselves on their website as “ a collective of Sydney & Melbourne based performers who are tied together by an innate desire to act like idiots.”  And the reality is, you can’t be an idiot on your own… that’s just weird.  There is safety in numbers.

THE LOST LOST CABARET was the final event of the BONDI FEAST and it is apparently the little sister to London’s The Lost Cabaret, and misguided brother to Melbourne’s The Lost Lost Lost Cabaret.  According to their blurb ….  Throughout 2016, The Lost Lost Cabaret was a regular show at Glebe’s now defunct Mr. Falcon’s.  And now it has returned!  For one night only!  At Bondi Feast!

Last night the six artists who were performing were squeezed into the Mini Theatre with its miniscule stage and very few seats..  It’s a chance to see these performers up close and personal  and the use of small venues is just one of the attractions of BONDI FEAST programming.  You also get to put Sold Out your next gig.  On this occasion, you can put Sold Out REaaaaly REaaaaly Early!

One of the other advantages is that you have a supportive space to try out your material, since another reality is that you simply don’t know if your gear works until you stand up.  “I must have you warmed up by now,” says one artist when a clap-desirous pun just lies there.  There was a fair amount of trying out and there were some lie-there gags.  All terrific learning material for sure in a Choo Choo safe environment.

The 2 MCs for the evening, Bobbie and Wanda (Debbie Zukerman and Alicia Gonzalez) arrived with some physical comedy which was supported by preparation and personality.  But the problems that all would have with the intimacy of the venue, only having the one gig with little preparation time in the space, and the tyranny of props and costumes that won’t behave,  also arrived with these characters.  They had fun mining the comic possibilities of that well-trod stand-up fare: the embarrassment of incompetence.

They were ably supported by Steve on the Keys!  His work was top notch, he was engaged, responsive, creative and supportive. The other 3 members of last night’s troupe were an elderly citizen who reads faxed hands … probably to supplement her pension, a Lorca inspired sad sack in a really stunning  costume and a doctor armed with a stethoscope to read what is in random audience members heads and play it out imaginatively on set.

There was a bit where members of the public were let loose with surgical tongs, some gross-out stuff, some female-centric gags, even a lesbian sub-plot!  The audience laughed and volunteered and congratulated them afterwards and the Choo Choo Troupe rose again to inspire new idiots in the nicest possible way.