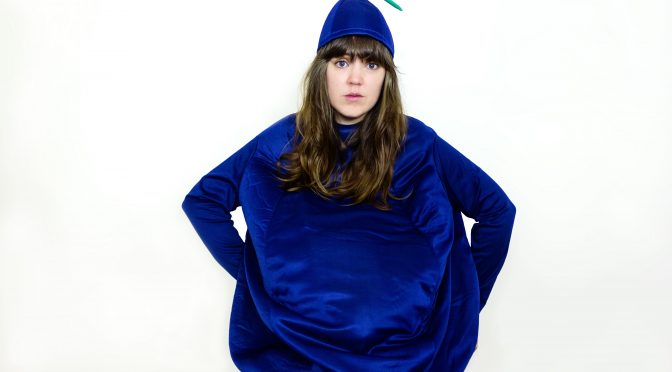 BLUEBERRY, by emerging playwright Ang Collins, is playing as part of the BATCH FESTIVAL at Griffin Theatre Company and it is such a healthy treat of show.  Sweet, compact, neatly packaged and with the tartness of unspoken sadness when you burst the skin.  Played with stellar technique and compassion and directed with style, BLUEBERRY is a moorish delicacy.

Our girl is having a bit of a hard time.  She’s off to a party dressed, by choice, as a giant blueberry.  And in an effort to ignore some very usual going-ons at home, involving but not limited to an old fat Labrador and copious bottles of chili sauce, she will try to forget her trouble with the help of her BFF and the party’s schoolboy host, Jonno.

Deftly penned, the script is in second person singular.  “You chose to go as a blueberry because …”.  And the distance, the emotionlessness, is as graphic as any dialogue that might read “I felt anxious, sad, unsafe, confused.”  And it is pulled off to perfection.

Contessa Treffone is wonderful in this role.  She grabs you by the funnybone and frog marches you down the laneways of her character’s teenagery.  Funny, actually hilarious in places, she captures the nuance of teenager with charm and infectious adolescent exaggeration.  And the overt disavowing of deep thought.

Not even to mention the technique.  She has a way of pausing just slightly, allowing us to catch up, drawing our attention to something not actually there.  Engagement, energy and excellent diction, particularly in the times of speedy dialogue, such as the creation of the chaos of home after the party.  And there is some superb use of physicality … especially when she shifts from place to place or sees something before we do, the words of explanation yet to leave her.  The blueberry costume builds on the considerable humour of the opening sections and Treffone’s ability to gesture completely awkwardly yet realistically is one of those comic subtleties which make this such an engaging production.

BLUEBERRY is beautifully directed in that regard (Sheridan Harbridge).  Robustly light hearted yet rigorously faithful to the truth of the lurking emotion, Harbidge never allows the character to slip into dead pan.  Yet there is an offhandedness to her which is delicately balanced to invite empathy.  It helps that the production provides Treffone with a straight man, a silent one, in the guise of projection.

The moving and still images are so much fun, not overused or showy but cleverly inserted as punctuation.  Boom boom.  And the running gag, hilariously ineptly created, belies the craft of choosing the just right images, creating the context for them and slotting them neatly into the text.  (Designer: Nicholas Fry)

Also excellent in support is the lighting.  (Alexander Berlarge) The changes are not too fast, simple quick crosses nor does the lighting take on all the mood or setting changes, instead it is comfortable and expressive with the script with a very well chosen colour plot.  An excellent adjunct to a character who notices the colour of everything, reveling in burgundy carpet and grey cockroaches. There’s some blueberry purple upstage and a red and orange for early morning.  And a lovely green and blue choice for the underwater.

That particular scene also delivers because of the excellent audio.  (Clemmence Williams) Echoey, just in hearing range, with modest notes without flourish to add to the realism.  And nicely done on the choice not to blast rock music for the parties, it must have been a temptation, instead we get the distant bass thump in rhythm with their hearts.

BLUEBERRY has a very short season until Saturday 21st but get your hands on a ticket if you can because the production is nourishing, natural and good for you.  It exercises your laugh muscles and your amygdala in a very satisfying way with a sweetness lingering.  Delicious.