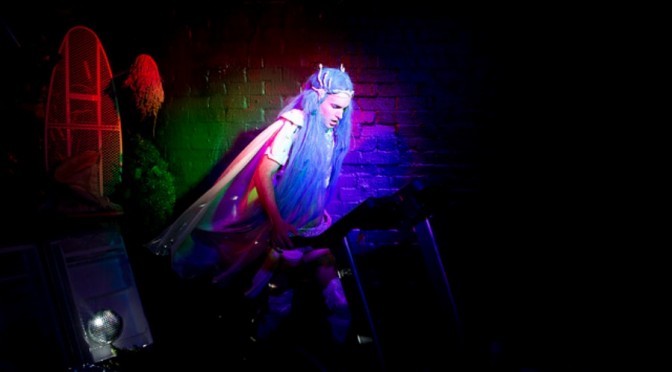 There is a lot of skill evident in BLUE WIZARD, playing at Belvoir Downstairs at the moment. And it’s right there and up close in this intimate venue.

There are true moments of engagement. There is really accomplished puppetry from the beautiful and skilled, Nick Coyle who wears his heart and sexual orientation on his sleeve. There is a flashy but never excessive lighting design from Damien Cooper combined with a sound design that is subtler than the noise you consciously appreciate (Steve Toulmin). There is Belvoir Artistic Director Ralph Myers as Design Consultant ensuring a unified space and Belvoir Resident Director, Adena Jacobs, as Dramaturg influencing some very moving moments.

But the moments and the images, skilfully created though they are, stand alone. They don’t cohere.

A Blue Wizard appears in smoky, ear bending flash. He is supposed to be delivering a sacred egg to the Ancient Egyptians but seems to be 3000 years too late. His ice comet has crashed on an Earth rubbish tip or perhaps it is a dystopian ‘Damn you all to Hell’ Planet of the Apes inspired future. He won a competition to be the Ambassador to Earth from another galaxy. In fact, he spent all his gems on voting for himself and has given up his boyfriend to be here. It’s a gay life on his world and he is lubed up and, after his greeting dance, dead keen to begin the fuckfest. That’s what the Blue Wizards do apparently.

Nick Coyle, actor, director and writer has quite a cult following from his writing work on ROMMY and HAMMERHEAD (IS DEAD) and his award winning radio hosting and he obviously knows a good metaphor when he strikes it. The Blue Wizard is a foreigner in a foreign land: alone, separate and desperate for contact. The context couldn’t be gayer. However, for me and my companions, loudly discussing the show in a gaggle of gayness on the pavement afterwards, that’s about the extent of it.

Queerness, what Coyle describes on Belvoir’s Facebook page as “more political and more provocative”, isn’t really in evidence either. Camp? That is there. In spades … shovels. Sequined short shorts and pink shot mirror balls combine with Britney Spears’ PERFUME on the soundtrack. There are some lovely glitter moments. There is even a bubble machine!

There are some pure emotion moments too. When the wizard tries to fit in and covers his costume with blanket and black, the metaphor pulls at the heart. When the toddler puppet turns its expressively bland face to the moon there is genuine sadness in the loss of light. I gasped out loud when despair overtook the wizard and he stood facing the back wall with shoulders as expressive as eyebrows.

There is some really terrific acting from Coyle at intervals and the opening scene is genuinely funny. The character tends to slip with the accent but there are plenty of times when the audience enters into pathos or the comedy or the animation of objects. It is the narrative which distanced us most.

The wizard came a long way from his home planet. Once he arrives there are still travels to be undertaken, both emotional and physical … the most simple and effective, done slow motion in a brilliantly chosen lighting hue.

However, the linear nature of the text leaves no room for a successful rounding out of the story. There are no breadcrumb trails to lead the character who has been orphaned on our shores to a reflection of the journey. There is no textual mechanism to unite the images and moments.

With all that talent behind it, BLUE WIZARD has a very cohesive aesthetic and the beats of the script, the costumes, the tech etc. are all true to the character and his circumstances. For me those moments and the images are worth the trip.

BLUE WIZARD continues at Belvoir Downstairs as part of the Mardi Gras Festival until March 15.