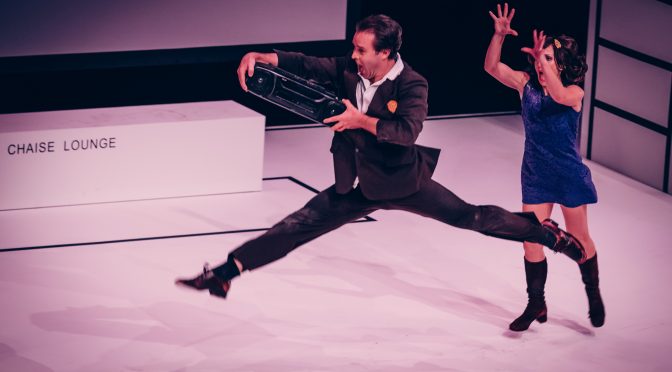 From a fantastic place where TV soap meets art-house film, Blue Love’s protagonists Glenn and Rhonda Flune take the audience on an expedition in search of the clichéd, perfect relationship.

Infused with intense movement, film and dance, BLUE LOVE is inspired by famous works of art, theatre, music and film; all of which deal with the concept of love. Glenn and Rhonda draw on and reference all of these art forms, parodying the lip-service given to love and its incarnations.

Parker wanted to create work about romantic love, saying “I was inspired by how romantic love runs rampant through all art forms, both popular and high-art, and provides such juicy thematic fodder for artists and audiences alike. It’s a topic that everyone knows only too well. In romantic love the cliché becomes the poignant and vice versa.

Enter our characters, Glenn and Rhonda Flune. They believe that they are the perfect couple, and in believing so become the tenuous, sometimes fabricated, sometimes real storyteller of BLUE LOVE. They and their ‘sketched-out’ living room become the canvas for our story as they reference film, dance, text and song in playing out their relationship.”

Originally created as an award-winning short film, BLUE LOVE was then developed into a full length physical theatre and dance work which has now been performed internationally, including at festivals in Germany, New Zealand and Singapore; and toured widely around Australia.

Shaun Parker & Company is an exhilarating and bold Australian dance company that has exploded onto the international dance scene, focusing on integrating choreographic forms, story-telling, diverse musical styles and theatrical invention. Next stop: Penrith for one night only!

Blue Love will be performed at the Joan Sutherland Performing Arts Centre on 19 August at 7.30pm.

Tickets are on sale at http://www.thejoan.com.au.

The Joan Sutherland Performing Arts Centre is located at 597 High Street, Penrith. Nearby parking and public transport is available.