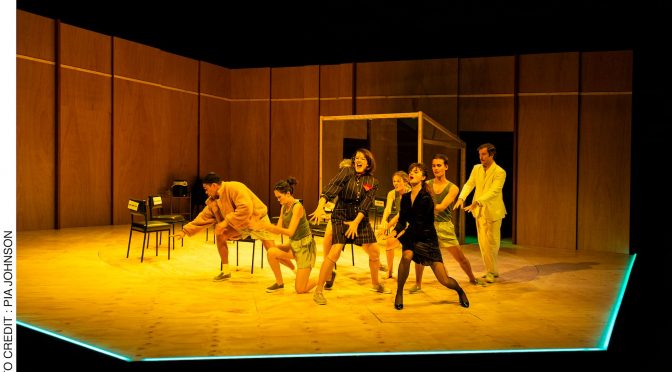 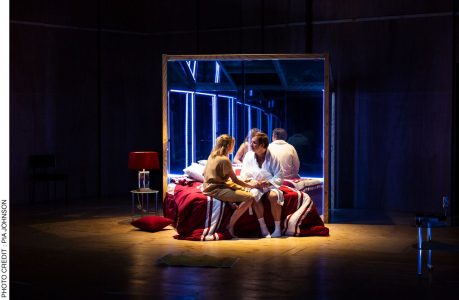 The vision splendid of Peter Carey’s novel BLISS is splendidly envisioned on stage by Tom Wright’s reverent and inventive adaptation.

The novel BLISS won the Miles Franklin Award. The film won AFI awards for Best Film, Best Director and Best Adapted Screenplay. It would be of no surprise that this adaptation, and, indeed, this production, also win awards.

Until then, it will harvest the plaudits of audiences as a rollicking, pin-pricking entertainment.

Tom Wright’s stage adaptation feels like the book, quite successfully plumbing the nuances and layers of meaning, the manic energy of the narrative infusing kinetically with the robust, ribald and rambunctious energy of the performers. It has the ongoing effect of energising the audience, ensuring Never a Dull Moment in almost three hours of theatre.

Madcap, adventurous, funny, sad and inventive, BLISS begins, like the book, with Harry Joy, Australian advertising doyen, dying for the first time, knocking at the Hell gate rather than Heaven’s door.

Harry’s death at the beginning of the play is a device to distance himself from, and therefore flay his life. Harry is suspicious of the scenario that he has been resuscitated and surmises that he is he in Hell, or at least some waiting room of the afterlife.

In this state, the play allows the narrative to attack follies and fears -cancer and carcinogens, the hollowness of city life, and the high altar of Mamon, advertising.

Toby Truslove is a beguiling, seductive, enchanting Harry Joy, whose capacity for telling stories is great.

No less accomplished as a yarn spinner, Amber McMahon as Harry’s wife, Bettina, fuels her character’s fury of being overlooked and neglected, mirroring many women’s experience as being kept in the shadow of their male spouse.

Charlotte Nicdao makes an impressive stage debut as their daughter Lucy, with Will McDonald as their drug dealing son, David.

Marco Chiappi is super droll in doubling many roles, including Harry’s business partner, Alex and a dog collar cleric whose pastoral care is contained to talking cricket.

Anna Samson is radiant as Honey Barbara, the whore Madonna apiarist who becomes the honeysuckle of Harry’s salvation.

And Susan Prior in a myriad of sharply defined, beautifully detailed characters, including the matriarchal head of a mental asylum, Alice Dalton. Carey’s description of her is ‘Mrs Dalton was a woman with a mission, which was to demystify mental illness….she had finally realised that mental illness was a business, just like anything else”. Prior nails it in a scary and hilarious embodiment.

Marg Horwell’s set and costume design is a winner, a set of pine panelled walls and floor with a revolve and a glass booth that is visually intriguing, symbolic and practical. The set is brilliantly, both literally and practically, augmented by Paul Jackson’s lighting design.

Stefan Gregory’s sound design and composition is subtly rich, with the playing of old Mojo jingles at interval a nice touch.

Satirical and elegiac, BLISS certainly lives up to its name. Who said there’s no truth in advertising?

A co production with Malthouse Theatre, BLISS is now showing at Belvoir Street