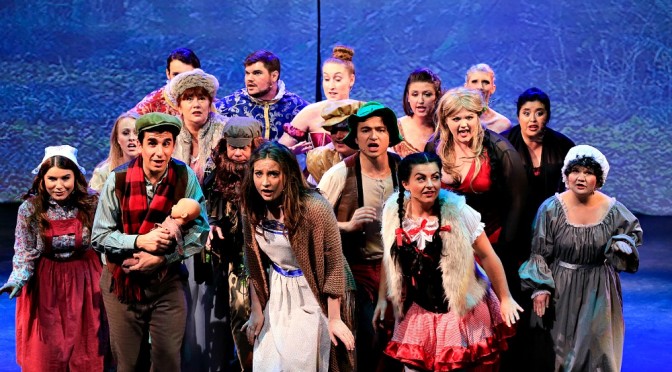 Inviting a reviewer to a preview is tricky. Anyone following the London Hamlet furore knows how horribly wrong it can go. People are exhausted, voices are tired, musicians are sore and techies are the walking dead. Writing a review about a preview is even trickier. What will naturally go wrong needs to be separated from what is endemically wrong?

And I hope I’m not wrong about this because I am about to write a glowing endorsement of Blacktown Theatre Company’s INTO THE WOODS at the Joan. I’m leaving out the plethora of things that the cast and crew are tweaking and adjusting and finishing off over the next 24 hours because the only thing a review reader needs to know is that this exuberant, colourful production is rich in concept and execution. I loved it warts and all.

You see there’s a witch at the centre of the story but this is Stephen Sondheim’s award winning modern classic so it’s not going to be a traditional witch. Even though the characters are absorbed from the pages of the Grimm Brothers and Charles Perrault’s Fairy Tales. The witch has cursed a baker and his wife to be childless and so they take on a quest to collect objects to reverse the curse.

INTO THE WOODS they go on this scavenger hunt. The objects they desire are a milky white cow (Jack and The Beanstalk), golden hair (Rapunzel), a glass slipper and a red cloak (from the usual suspects). There is even Rumpelstiltskin in the mix. Spoiler alert, they get all their overt wishes by the end of Act 1.

The show was first produced in 1986, has had several revivals and was made into a star studded film in 2014. It is a favourite for Musical Societies but it is difficult. Not just musically but structurally. The second act can be interminable as Sondheim explores consequences and responsibility. ‘I wish’ is the nominal and musical repetition of the show and the second act can be dark in its elaboration of the theme.

Not here. The overarching reason for my enjoyment of the show was the Director’s (Angela-Therese Hanna) tight control over the emotion, the musical rendering of the story and the conceptualisation of the production. She allowed her cast funny and emotional moments without sinking into overacting or smaltz. The blocking of the songs adds to the enjoyment of the words and the production concept bangs!

Obviously, there are animals in this show. A wolf (Philby Macintosh) and a cow (Catherine Henderson) and they are both hilarious and come very close to stealing their scenes…but not quite. Hanna has struck the perfect balance. Pulling Macintosh back as the Cinderella’s Prince was no mean feat I bet. He is exciting to watch and perfectly played.

This is also true of Annastasia Denton as Cinders. This is such a lovely performance. Sondheim’s badly treated scullion is incredibly conflicted about what she wants, gets and is told she wishes for. Her interpretation of ‘Your Fault’ in Act 2 shows the longing and confusion inherent in her character and it really absorbs the audience in that difficult act.

But what finally pulls themes into alignment as the show is ending is the wonderful baritone of Paul Oscuro as the Baker. Rich lower tones and soaring tops with an expressive and perfectly flown high G in “No More”. The other very strong voice in the company is Erin Bogart as the witch. A triple threat she can do it all and is a crowd favourite with audience. Again, Hanna has just pulled her back from caricature or melodrama.

There are other great performances too. Jack (Patrick Forest) is dopily endearing without slipping into disability and the Narrator (Michael Robinson) in a non-singing role avoids being portentous yet is professorial and warm. The relationships are clear too and the warmth between the baker and his driven and not quite moral wife (Stephanie Bellchambers) is charming. Red Riding Hood (Briony Burnes) is also marvellous. With her open face, strong physicality and comic timing she hits the adolescent, irrepressibly perky, tough-cookie note perfectly.

Music Director Koren Deale also has tight control over his 15 piece orchestra and they are never too loud or present the cast with any extra problems in the difficult syncopated score. I would say that the audio mix does need to support the artists a bit more, especially in the top ranges. However, the clever blocking by the Director gives both stillness and interesting movement   choreography by Sharnee O’Donnell) to drive the songs through. Mention must be made of the trumpet and piccolo which are used so frequently during the show; they did a great job to my ears.

So. Actor/ singers good. Orchestra good. Costumes fantastic. Lighting simple and effective. What about the set? I’m not telling. Not because it is one of those things that didn’t work on Preview night but because it is just so darn good. And such a surprise. Blacktown Theatre Company is to be congratulated on this huge leap of faith for their 15th Anniversary Season and best wishes for that Opening Night adrenaline.

INTO THE WOODS has a short season until Saturday October 3rd at the Joan, Penrith.

One thought on “BLACKTOWN THEATRE COMPANY PRESENTS INTO THE WOODS @ THE JOAN, PENRITH”