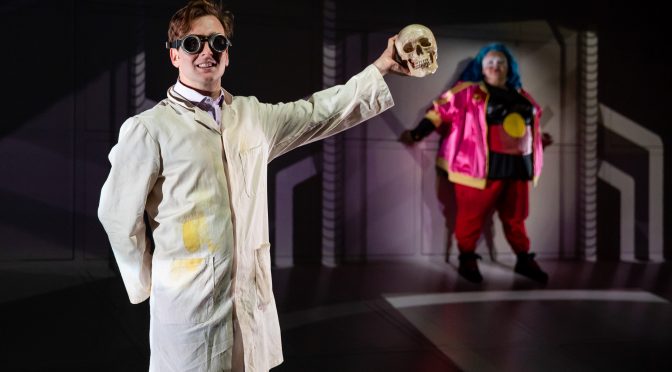 Dr Black’s great-great-grandmother speaks to her from beyond the veil. She speaks of the white men who brutally massacred her family. She speaks of that sin being passed down through the generations. Dr Black tasks Jacqueline with exacting revenge – she must kill all 400 descendants of the men who murdered her ancestors. A cold-blooded vigilante is born: Blackie Blackie Brown, the traditional owner of death.

This show proved to be a good night at the theatre, clearly aimed at a young audience. It was so refreshing to see a new play which left political correctness way behind and let out some of the revenge energy that indigenous people must feel.

Lui’s play is a two hander. Newcomer Megan Wilding gives a very vibrant performance as an indigenous superhero badass. One can’t keep one’s eyes off her. The always quirky Ash Flanders plays every person whom she is aiming to kill.

Recommended, BLACKIE BLACKIE BROWN : THE TRADITIONAL OWNER OF DEATH, directed by Declan Greene, opened at Wharf 2,  Sydney Theatre Company, on Thursday 17th May and is playing till 30th June. Performance times are Mondays to Saturdays 7.30pm  with matinee performances on Wednesdays at 1.30pm. Running time 90 minutes straight through. The time passes by in a flash!