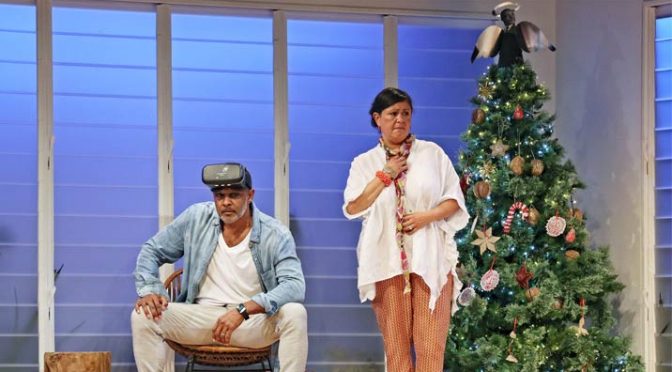 This show has a sadly too short season but if at all possible try and catch it if you can. This show had a rare combination of being a very warm, vibrant comedy as well as having plenty to say.

The play features a ‘hothouse’ scenario  with an interracial love story sitting at the heart of the play.  Shari Sebbens plays brilliant indigenous lawyer Charlotte Gibbons who has fallen in love with white, talented cellist Frances Smith, played by Tom Stokes. The  couple introduce themselves to each other’s family, who know nothing of the interracial nature of their romance at a Christmas lunch held by Charlotte’s parents, Ray Gibson, played by Tony Briggs and wife Joan, played by  Melanie Reynolds-Diarra.

This is a very audience friendly play.  Overseeing the play is a very good natured narrator who describes himself as the spirit of Christmas, played by a very spritely Luke Carroll. Through the play he introduces us to all of the characters and tells us a bit about their story.

At its heart, indigenous playwright Nakkiah Lui’s play is about how life has a habit of throwing up plenty of curve balls – the characters face so many challenges – and it’s all in how we deal with them. It’s edge of the seat comedy as we wait  to see how the characters react to the latest surprise/shock that befalls them.

There are just so many good reasons to see this show.  Paige Rattray’s fast paced production. The talent, the warmth and the high energy of the cast who just give so much. Each play their well drawn character so strongly. The show features a lot  of quick repartee, music and dance to renew the spirits. Renee Mulder’s lovingly detailed set and the warm colours of Ben Hughes’ lighting design are also big pluses.

A very warm, vibrant night at the theatre. BLACK IS THE NEW WHITE is playing the Roslyn Packer Theatre until the 10th March, 2018.  The play will then move to the Riverside at Parramatta between  the 21st to 24th March and then the Canberra Theatre Centre between the 28th and 31st March, 2018.