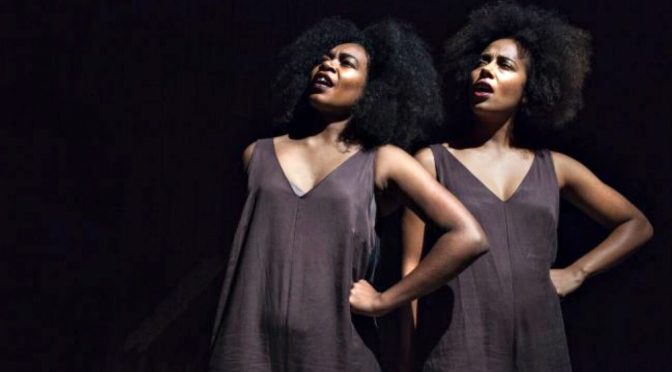 Ugavule and Ash share their stories of how they were ostracised & bullied as children and feared, shunned, mistreated and misunderstood as they moved into adulthood. Some of the worst treatment they experienced was from people who thought they were being liberal and inclusive but were, in fact, still focusing on these women’s difference and were not interacting with them as individuals.

Words or actions that the initiator more than likely doesn’t take notice of, can actually be little things that cause deep and entrenched suffering. Ugavule and Ash explain this in a bright and stylish performance which, in the hands of less skilful performance artists, could have been tedious and didactic.

Their experience of our society has been that people mainly perceive them in a stereotypical fashion. The duo play up to these perceptions in some of the funniest segments of the performance, which also included some quite beautiful singing and dancing.

BLACK BIRDS satirised how women of colour are treated in modern day Australia and will hopefully raise awareness that this ‘attitude’ in our society needs to change.

A strong team of creatives- set design by Tyler Hawkins, lighting design by Amber Silk, sound design by Ben Pierpoint, and choreography by Sarah Vai –  help to bring the work of these two talented black birds to life.

Highly recommended, BLACK BIRDS opened at the Joan Sutherland Performing Arts Centre, Penrith on March 30 and is playing until April 8.