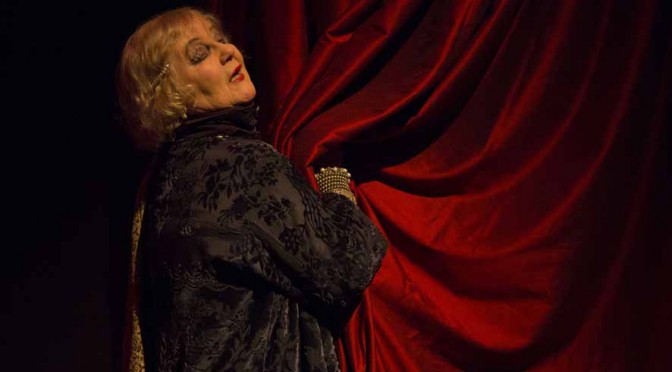 A grotesque and entertaining French cabaret is the latest production at The Depot Theatre. Chrissie Shaw’s Bijou is a faded character from early twentieth century Paris. She was a sought after beauty, a collector of jewelry, a singer, a dancer, a great hostess and a seedy operator when times were hard.

Her dramatic entrance in a glorious costume tells the audience we are in the presence of a great performer, although slightly tarnished by years of alcohol assisted depravity. She has wandered into a bar and cajoles the piano player into playing songs to her liking, and plays up to the audience to extract coins and drinks from them.

Chrissie’s voice is ideally suited to this role. She has an impressive range and a timbre that suits the periods covered: the Belle Epoque, the war years and the roaring twenties. The evocative music and songs chosen are from composers such as Claude Debussy, Francis Poulenc, Erik Satie and Saint-Saens. My favourites were the luscious Parlez-Moi D’Amour by Jean Lenoir and Ballad of Sexual Obsession, by the fabulous Bertolt Brecht and Kurt Weill. She sings in French, English and German and her singing is at its most affecting and expressive when in French, but for the purposes of conveying the story English is required.

Interwoven with the music are Bijou’s reminisces of the heady days when she was young and beautiful. At a performance of The Cow on the Roof she met Cocteau and was seduced by him leading to years of parties and esoteric living. Other stories follow of decadence, exploitation and abuse. Bijou suffered at the hands of the local priest and tells a long harrowing tale of those dark years. This gloom is balanced during the performance with a hilarious striptease routine, her steamy encounters, her performance art and dancing. Bijou is a largish older woman and a lot of her humour comes from the unexpectedness of her behaviour when dancing or being simultaneously coquettish and overtly sexual.

Chrissie is accompanied on piano by the versatile Alan Hicks. His singing captures the era and with the help of designers Imogen Keen, Victoria Worley, lighting designer Gillian Schwab and Liz Lea as choreographer, have fashioned a cabaret-style romp that places us in an old bar in Paris.