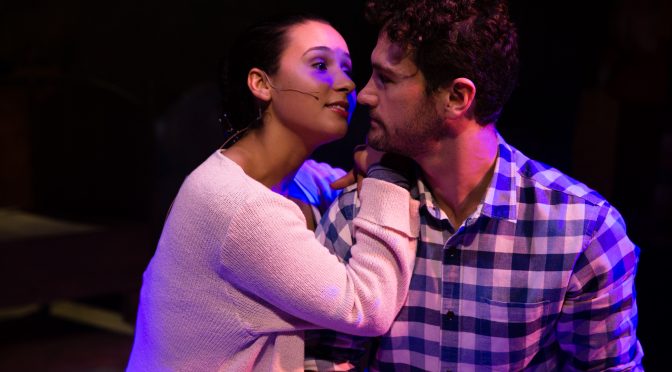 The small orchestra as led by Luke Byrne are invisible behind the scenery – we never see them but they are terrific. The set – young Will’s bedroom with seashell ruffles at the back for the mermaid – allows for fluid scene and locale changes including the moving  in and out of beds and tables etc.

The musical is based on the celebrated novel by Daniel Wallace and the acclaimed 2003 Columbia Pictures film directed by Tim Burton. The book  is by John August, who also wrote the original screenplay, with music and lyrics by Andrew Lippa .

The musical premiered on Broadway at the Neil Simon Theatre in October 2013 and has been rewritten and reconfigured for this production. In some ways the show has affinities with  productions such as Into the Woods, Cloudstreet, The Book of Everything and even Oklahoma.

The story centres on Edward Bloom, a travelling salesman who lives life to its fullest… and then some! Edward’s incredible, larger-than-life stories thrill everyone around him – most of all, his devoted wife Sandra and their adult son, Will.

Will, about to have a child of his own, is determined to work out what is true and what is made up in his father’s storytelling. Faced with his father’s impending death Will begins to search even more desperately for the truth about the man he feels that he hardly knows, and discovers some secrets.

The musical seamlessly jumps between the enchanting magical world of Edward’s stories and the heartfelt interactions of a family faced with separation, grief and loss.

Edward’s fabulous stories have all the elements of magical myths, including love at first sight ( ‘Time Stops ‘) and an extremely romantic proposal scene ( ‘Daffodils’ ) but the true story of how Edward saved a town is only very reluctantly revealed .

The entire cast is superb. Phillip Lowe led the show as Edward. Lowe fluidly jumped between Bloom’s elder and younger selves and the different parts of his life, is totally captivating either as the charming younger travelling salesman, with baseball cap and cheekily engaging grin, as he is performing his older self.

Katrina Retallick as Sandra pulls out all the stops in a magnificent performance. Look out for the heartbreaking I Don’t Need A Roof  in Act 2 – just one example of her mesmerising talent.

Adam Rennie provides a terrific performance as the puzzled, troubled adult Will searching for the truth about his father. The emotional interactions between Edward and Will are powerful highlights to be treasured. Take some tissues –at  times during the show audience members were crying.

Jenny Hill, who has always also loved Edward, but he breaks her heart, is given a warm, thoughtful performance by Kirby Burgess.

Gentle giant Karl,  played by Seth Drury, looms over proceedings with some of the show’s best  one-liners.

Brittanie Shipway plays the dark and sultry witch with her crystal ball and unusual moss like creatures which she controls. Is she a friend or foe?!

Brendan Lovett doubles up as the  somewhat sinister circus manager, Amos Calloway, and the warm and caring Dr Bennett. The show features circus acts including clowns, aerial acts, jugglers, tumblers, and a bearded lady There is a Barnum like circus number – On The Road – which is elegantly staged.

With warmth, humour, whimsy and a magnificent cast this show is phenomenal , theatrical magic and a must see. The full house standing ovation was more than richly deserved. Quick! Go treat yourself now.

Running time just over 150 minute including one interval.

BIG FISH is  playing at the Hayes Theatre, Greenknowe Avenue until 14th May.

One thought on “BIG FISH : A MUST SEE @ THE HAYES”