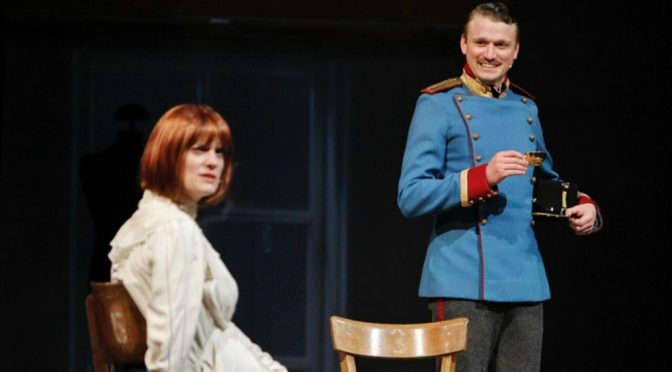 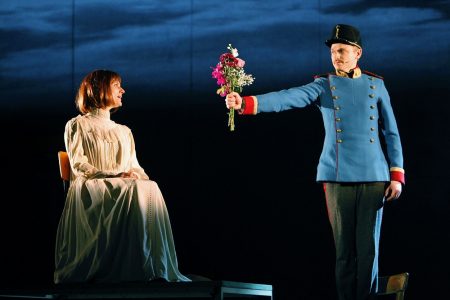 Directed by Simon McBurney and James Yeatman this is a co production between Complicite and SCHAUBÜHNE BERLIN . It is an astonishing bravura ensemble piece. It is one of the major Sydney Festival events and has a short season only playing n Sydney.

Based on Austrian Stefan Zweig’s 1939 novel, BEWARE OF PITY follows the misadventures of Anton Hofmiller, a young cavalry officer who falls in love with Edith, the partially paralysed daughter of a local landowner, but goes on to break her heart. Overwhelmed by guilt when the girl takes her own life, Anton enacts a well-meaning but tragically ill headed plot to put things right. It is a story of guilt, pity,  trying to do the right thing and how unreceived messages can cause tragedy. The play is set in 1937, looking back at the tumult and horrors of World War 1, and not long before the onslaught of World War 11.

All is presented in non naturalistic mode with sensational lighting by Paul Anderson. Much is made of the symbolism of the bloodied jacket that is preserved in the museum that Franz Ferdinand wore when he was assassinated (Anton changes into a similar military jacket.) There is also the visual symbolism of the white dress that Edith wears and the constantly moving table on which Edith is whisked around the stage. Eerily sometimes just the dress itself is moved. Edith’s instability is indicated at times by the use of two actors lip synching her words.There are some tables and chairs in a sparse set, and the actors speak into on-stage microphones. The action is at times frenetic, at others frozen in tableaux.

The cast of seven are exceptional, many of them playing multiple characters. They are led by Christoph Gawenda who plays the older, anxious, disillusioned Anton, acting as narrator.  He now scorns the military honours he won in 1914-18 . Laurenz Laufenberg portrays Anton’s staunch ,guileless younger self.

Will Duke’s video feature, with its inclusion of images of battlefields, reminds us that the story must be seen in the context of the disastrous build up to World War 1. Also included is footage of Pavlova as the Dying Swan, and live footage shot from above at certain points of the action on stage, as well as wonderful landscape images including an image of a hurtling train carriage. The cast become wonderful cavalry horses in stylised movement and Pete Malkin’s sound score is at times ticking, ominous and oppressive whilst at other times exuberant .

This was an intense, gripping, melancholic, thought provoking production.

Running time roughly 2 hours 15 minutes without  interval.
This performance is in German with English surtitles and contains strobe lighting, pyrotechnics and smoking. A lockout period applies.

BEWARE OF PITY is playing as part of the Sydney Festival and is running at the Roslyn Packer Theatre until the 27th January 2019.