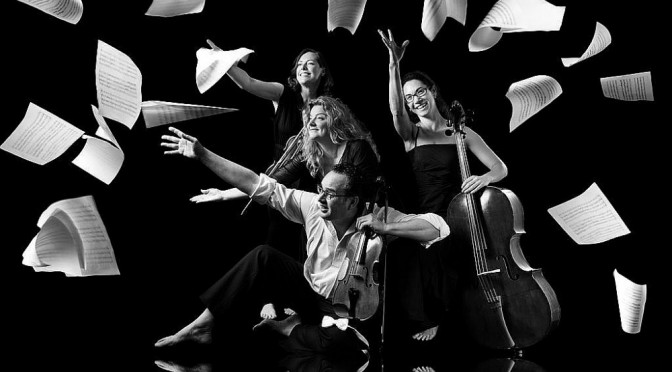 Heavily attended by a mixed audience of all ages from small children to grandparents this was a sensational concert to launch the new CD of the same title by Nicholas ( Nick) Russoniello .The warm acoustics of the converted church with luminous stained glass windows were splendid and it was a fine performance of virtuoso playing .

Russoniello was supported by the magnificent Acacia Quartet who were in splendid form .It is a rather unusual combination , string quartet and saxophone soloist but it works brilliantly .

The title comes from Russoniello’s tour of Europe and Mexico a couple of years ago , reflecting the difference in styles and influences and the inspiration of Greek folk melodies. Also the title could be used perhaps to refer to second generation immigrants caught between the two worlds of their parents ‘home’ and the country/the world in which they are now living.

First up was ‘Children’s Song Suite’ by Chick Correa arranged by Ian Stewart . No 7. Adante was bright with a catchy rolling melody. No.6 ,also Adante was haunting , circular in feel with quirky jumps No 19, the Lento, was slower, more melancholy and reflective , at least at first but it then changed to a jazzy sound with a saxophone fireworks solo and then a return to the quieter mood .No. 18 ,the Allegro, featured insistent , tumultuous strings stridently assertive.

‘The New South ‘ by Russoniello was cool and mellow , the sax sounding like rich, gold chocolate. Another showy solo, it was fluttery yet simultaneously sharp and jazzy with aural fireworks.

‘Butterflying’ by Elena Kats-Chernin had tremulous, quavering strings and a lush, warm tone .The sax sets the theme and melody and you can hear the wings expanding in the soaring delicate ending as it flies away.

‘Between Worlds’ by Jeremy Rose , the eponymous work of the CD and concert, is in three short movements. The first movement was a frenetic dance with the strings going wildly while the saxophone soloist tries to stick to the melody. There is a circular dance in form and melody, with a strident saxophone solo and more turbulent strings in the second movement and the third movement was rather sad and elegiac with lush, lyrical strings. There was fragile exquisite violin while the cello ominously rumbled underneath. Again a dancelike rhythm, with pizzicato for the strings while the sax was  jumping through and around the music’s structure.

Russoniello’s ‘Dawn Searching ‘ was next – a dazzling virtuoso display by the composer and performer himself ,where the saxophone was full of lyrical sound , tweeting birdcalls and dazzling trills and spills that were sometimes repeated.

The piece was performed on a bright, shiny gold baritone sax with a funky, deep bopping rhythm .The sounds produced ranged from drum to handclap to almost an organ and you could see the marching band on the parade ground. The audience was really grooving!

To bring the concert to a whimsical, charming end on an upbeat note we heard ‘Russian Rag’ ( a.k.a the ‘ Wombat Waltz ‘ ) by Elena Kats –Chernin which was much fun, with the insistent powerful rhythms , pulsating strings and slippery ,skittering saxophone.

This was a concert  full of vibrant energy and the audience applauded tumultuously at the end. A marvelous way to launch the CD.

BETWEEN TWO WORLDS  was first performed at the Mosman Art Gallery on Sunday 31 August.

Running time an hour (approx) no interval. The performance was sponsored by fine music 102.5.