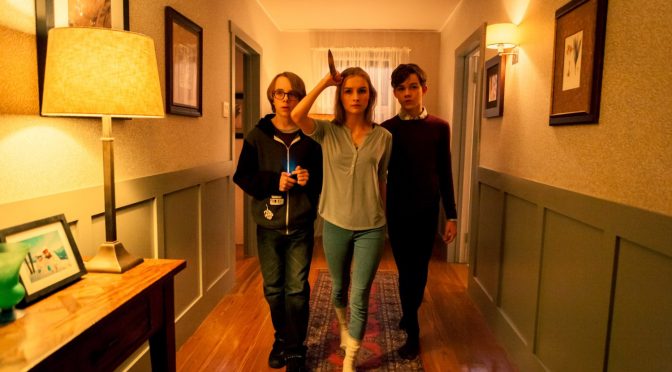 Add a touch of Home Alone and a tincture of When A Stranger Calls and a pinch of Rope and Psycho you have the best genre picture made in Australia since I dunno when.

You better watch out for this film, to miss it will make you cry.  Better not pout, you’ll probably shout, certainly scream, I’m telling you why it is as fun as a scary clown.

If you’re making a list and checking it twice, trying to find out which film’s naughty and nice, then let me tell you, BETTER WATCH OUT is comin’ to town.

You won’t see it when you’re sleepin’, cause it’s gonna keep you starkly awake.

Oh! You better watch out, will make you sigh, I’m telling you why, it’s the best Christmas slay ride since I can’t remember when.

With little sharp shocks, and little twists and turns, rooty toot toots and homicidal home runs, BETTER WATCH OUT doesn’t let you down.

Australian starlet, Olivia DeJonge plays Ashley, regular baby sitter to twelve year old Luke, who harbours an unrequited crush on the comely carer. He has diabolic designs to be her stocking filler this Christmas. But it looks like his carnal plans may not go to, well, plan, because the house seems besieged by home invaders.

Rising Aussie star, Levi Miller jettisons his Jasper Jones gentle juvenile and embraces his darker side in his seriously sinister study of a silver spoon psycho.

Emerging Australian screen candy, Aleks Mikic and Dacre Montgomery round out the local contingent as would be wooers of the distressed damsel, making a macabre melange of a menage a trois.

There’s a couple of Yanks thrown into the mix – Patrick Warburton and Virginia Madsen play Luke’s lacklustre parents – but the picture belongs to the Aussies in performance and production values.

The writer/director, Chris Peckover may be Canadian by birth but has an Australian spirit and an American eye for Hollywood film making. Not content with mashing a slasher open slay, he pays due diligence to master craftsman of suspense, the most notable homage to Hitchcock.

Cinematographer is Australian Carl Robertson and he lights the film up like a killer Christmas tree, a conflagration of a rolling Yule tide log.

BETTER WATCH OUT is like a nativity play gone native, with the babysitter verging on Mary, an immaculate conception of girl power tested by palpable peril and the boy child more demonic than angelic, and a crib surrounded by three wise guys.