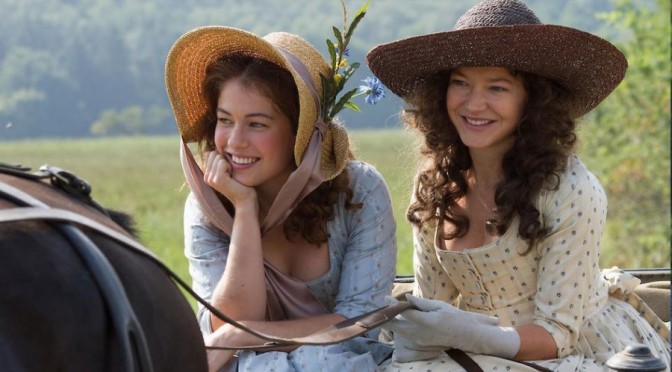 This drama occurs at the same time as the French Revolution, and the revolutionary thoughts and ideals of the French bourgeoisie are shared by the educated Germans that Schiller associates with. This is a time of intriguing and endless possibilities, sentiments reflected in complicated lives of the films main protagonists.

As the title suggests the movie focuses on the two sisters. Their mother has placed great importance on their making a good marriage. Schiller, who was called Fritz by almost everyone, is not seen as a suitable husband, being a penniless poet dressed in ragged clothes.

Which sister will Schiller choose? In these times of upheaval and innovative ideas is a ménage à trois a possibility? How much influence does the mother hold over the daughters? These are some of the questions that the movie poses.

BELOVED SISTERS at Palace Norton street opened this years’ German Film Festival.  The film was introduced by German Consul General who commented that if he had seen the film whilst he was studying Schiller in high school, it would have made his studies more meaningful and enjoyable.

A film with more detail about Schiller’s aesthetics would have suited a local audience more.

BELOVED SISTERS is a long film that tries to follow whole life stories and forgoes some dramatic tension as it stays very close to real life events.

Not withstanding this, we have a thoughtful film, a love story and a discussion about freedom and the ideas of the time, featuring glorious shots of the German countryside and lovely old European buildings and towns.

The director and writer Dominik Graf assembled an excellent cast including Hannah Herzsprung, Florian Stetter, Henriette Confurius, Claudia Messner andAnne Schäfer. Florian Stetter was a guest of the festival and spoke at the opening night.

The Audi Festival of German Films is playing in Sydney until the 28th May.

For more information about the Festival visit http://www.goethe.de/OZFILMFEST