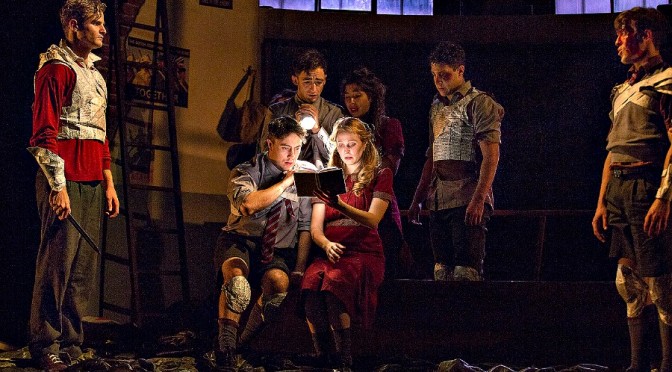 “We few, we happy few, we band of brothers.” The very familiar rousing speech is a powerful and emotive call to the troops. Shakespeare’s HENRY V sees the English forces taking the battle to the French.

In the current Bell Shakespeare production there are no overt references to current struggles in the Middle East or recent actions in Iraq or Afghanistan but one doubts if there any motivational speeches as rousing as the St Crispin’s Day speech or : “Once more unto the breach, dear friends, once more,” the famous speech from the siege of Harfleur.

Director Damien Ryan’s restaging of HENRY V is inspired by a true story. In 1941, for 57 consecutive nights during the London Blitz, a group of boys trapped in a bunker rehearsed a new play each week and would then perform it for others in the shelter.

This world is captured with a wonderful set by Anna Gardiner that looks like wartime England and is quickly and almost continuously adapted by the actors into different manifestations. By moving chairs and bookcases they create a church, a royal court, a ship, a tavern and a battle scene.

Sian James-Holland’s lighting and Steve Francis’ sound assist in defining the different locations as well as adding the sounds, lights and atmosphere of London caught in wartime.

The rehearsals and productions of the earlier related plays Richard II and Henry IV are quickly dealt with and Henry V becomes the main focus of the evening.

One of the highlights of the performance is the beautiful singing of the talented young cast. Sublime harmonies create different atmospheres relating to events on stage. Gregorian chants, rousing patriotic songs and songs with a French flavour all add to the production. Inspirational drumming is used extensively to evoke the battle scenes.

The play within a play structure results in all actors performing numerous roles. They also switch from playing members of the English court to members of the French court.

The young and enthusiastic cast capture the intensity, humour and emotion of Shakespeare’s play however could be improved with better voice projection and delivery.

Keith Agius’ performance is more subdued than the younger members of the cast but his measured delivery is excellent.

In a pleasing reversal of the original historical performances there are females playing male roles.

This is a bright and entertaining production and is well worth seeing.

The production  then moves moves on to the Playhouse Theatre at the Sydney Opera House where it opens on Thursday 23rd October and is playing until until Sunday 16th November.