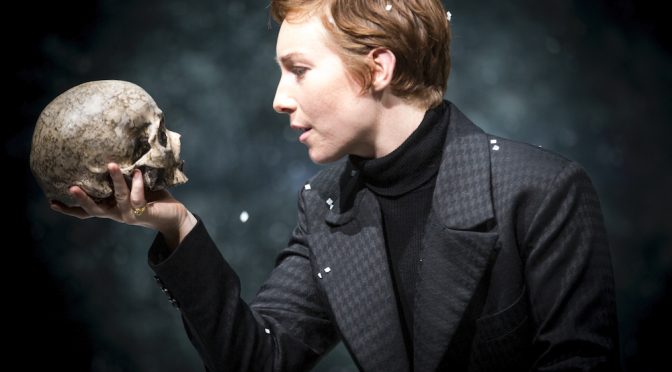 Every commentator remarks that every generation views ‘Hamlet’ through its own prism.

One of the recent defining incidents that has effected all our lives is the destruction of the Twin Towers and subsequent wave of terrorist attacks, both in the Middle East and the West.

The riveting, spellbinding, incendiary  performance by Harriet Gordon-Anderson as Hamlet conveys the fermenting of a terrorist’s mind. The woman playing a man’ decision is an irrelevance. Women playing Hamlet goes back as far as the late 19th century with Sarah Bernhardt taking on. the role. Furthermore, Hamlet is a fairly androgynous role. The only sign of overt masculinity is displayed in the sword fight at the end

The hallmark of a terrorist is to blame events or people, without taking on any responsibility.   Hamlet’s spurning of Ophelia and his murder of the hapless Polonius demonstrates his lack of empathy, in other words he is sociopath. In his plotting and scheming and manipulation of people he reminds me of Iago in ‘Othello’.

Harriet Gordon-Anderson shows a soul poisoned by the murder of his father, the ascension of his Uncle Claudius to the throne and the incestuous marriage of his mother Gertrude to Claudius.

As she roams the stage Shakespeare’s words spill out of her  with an acidic, sardonic and sometimes ironic cynicism. This is satisfyingly cathartic.

James Lugton as King Claudius gives  a surprisingly nuanced performance. His professed deep love for Gertrude is almost touching, but his lust and  ambition drive him to murder.

Lisa  McCune’s Gertrude is very effective as Hamlet’s loving mother who is cruelly attacked by her son.

In her debut with the Bell Shakespeare Company,  Sophie Wilde as Ophelia vividly displays her character’s mental deterioration from deep hurt at Hamlet’s malevolence towards her, then to madness at the murder of her father and then her eventual suicide. Her wide eyed gaze and slim, angular posture reminded me of a deer caught in headlights.

A special mention must be made of Robert Menzies performance  as the hapless Polonius, Ophelia’s father, a well meaning, trusting person who is aware of his own foolishness. This was the comic star turn of the evening.

Coming a close second in comedic terms are Tony Cogin, Jack Crumlin (who also plays Laertes) and Aanisa Vylet, a theatre troupe who naively perform  a serious drama that is actually a parable for the murder of Hamlet’s father by his brother.

The accomplished principals were complemented by a  talented supporting cast comprising of Jeremi Campese as Rosencrantz/Marcellus, James Evans as Horatio, Jane Mahady as  Guildenstern/Reynaldo/Bernardo. Rosencrantz and Guildenstern always bounded onto the stage but were unable to quell, cheer up their  dark natured friend, Hamlet.

Nigel Poulton as Movement and Fight Director choreographed  a thrilling and exciting sword fight between the betrayed Laertes and Hamlet.

Director Peter Evans created a splendid ensemble performance in the way he combined the  youthful energetic and passionate Hamlet and friends with middle aged players such as James Lugton to the seniority and authentic performance of Robert Menzies.

Laura Turner as video designer projected ‘degraded’ eight mm vignettes of Hamlet as a young carefree boy laughingly playing with his mother in contrast to his dark, brooding nature as the adult Hamlet.

Designer Anna Tregloan has created on one hand a very static backdrop of Danish snow covered fir trees that convert from a house to a pillar adorned with a rug whereby Polonius is murdered. To add to the wintry gloom of a.’rotting’ Denmark, she adds to appropriate parts of the play snow effects that give a lot of atmosphere to the play.

This was  then first performance in the 30th anniversary year of the Bell Shakespeare company. Its  first performance was ‘Hamlet’ played in a tent at the Old Tate Theatre featured an acclaimed performance by John Bell. This innovative and daring performance, together with other renowned  productions featuring the Elsinore lad, is a worthy successor. The standing ovation for this production was very well deserved.

This Bell Shakespeare production of ‘Hamlet’ is playing the Playhouse at the Sydney Opera House until Saturday 4th April, 2020.

Harriet Gordon-Anderson confronting Yorick’s.skull in ‘Hamlet’ at the Playhouse. Pic by Brett Boardman.