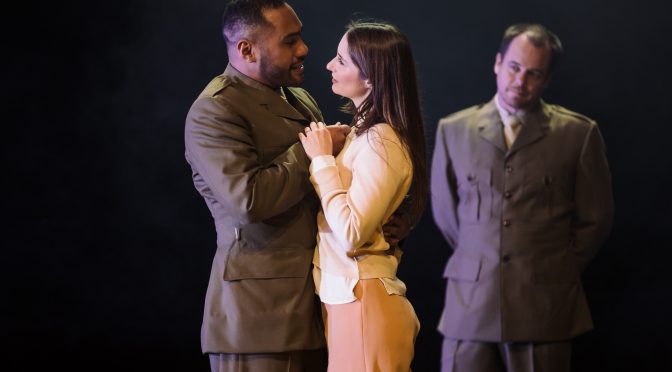 It is always interesting to reflect on what one takes away from a book, a play, a film, for that matter, any work of art. Actually, it is more than interesting…it is the main thing…to find those elements that touch a chord, hit a nerve.

I have seen more than my fair share of Othello’s over the years.

It is such  a powerful play. It feels like it takes forever to get over it. I still can’t get my head around  how actors can perform this play night after night…for this current troupe since their opening performance in Orange at the beginning of July, and that’s not even taking into account their extensive rehearsal period.

Et tu, Iago. Forgive me for mixing Shakespeare plays but this is what i most took away from this latest revival. Like Brutus in Julius Caesar, Iago was the Moor’s best mate, his comrade, and just like Brutus, he brings his best mate all the way down…

The Bard clearly didn’t have much belief in human loyalty, especially when the loyalty is tested by ego, by jealousy, by pride…

An absence of loyalty…and the other big notion that stands out is the presence  of human evil. Iago is such a horrible, evil, calculating character.

A strong cast bring this haunting Shakespeare play sharply to life. The leads are great – Ray Chong Nee is excellent as Othello as is Yalin Ozucelik, and Elizabeth Nabben as Desdemona.

They are well supported by James Lugton as Brabantio/Lodovico, Michael Wahr as Cassio, Edmund Lemoke- Hogan as Roderigo, Joanna Downing as Emilia, Alice Keohavong as Bianca, and Huw Mckinnon as Duke/Monatano.

Recommended, Bell Shakespeare’s production of OTHELLO is playing the Playhouse at the Sydney Opera House until Sunday December 4.

Below are some photos taken on opening night in the foyer after the performance.