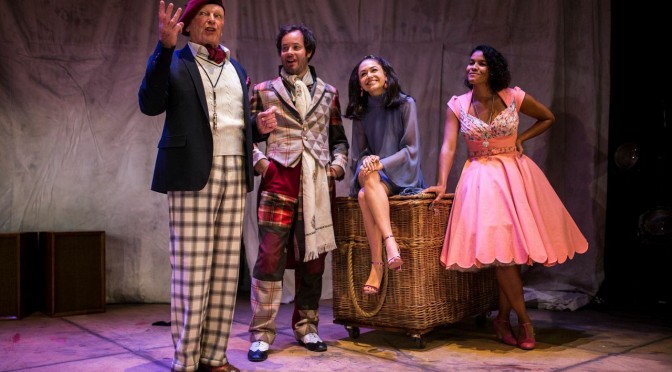 Bell Shakespeare has opened its 2015 season and its 25th anniversary year with AS YOU LIKE IT. As John Bell is retiring from the company he so successfully started in 1990, this production will be the last one co-directed with Bell and ongoing Artistic Director Peter Evans.

Bell and Evans open their program notes with, “Above the new Globe Theatre in 1599 stood the words, ‘Totus mundus agit histrionem’, which can be translated as ‘All the world’s a stage’, the monologue so beautifully delivered in the play by Bell’s restless and melancholic character, Jaques.

This motto seems to be reflected throughout the play, including the adaptable and minimalist set design by Michael Hankin, which, including 5,500 hanging flowers, could be set anywhere, anytime. Kate Aubrey’s radical costume design incorporates the 30s, 50s and 60s decades, further enhancing the timelessness of the world stage.

Andy McLean’s thought provoking essay, ‘All In the Mind’, from the program, includes, “Evans has created a meta landscape. A dreamscape…an abstract space for his production so that the action is no longer set anywhere, but is somehow simultaneously everywhere. It is your lounge room, your office, meeting room, the interior landscape of your mind…characters wander in, encounter others and wander out seemingly irrevocably changed….a lazy, hazy daydream of a play.”

Evans has assembled a fine cast and crew, with great lighting by Paul Jackson and superb sound and music by Kelly Ryall and Nate Edmondson.

McLean also says of Rosalind in the programme, “She sets herself up as a quasi-author or director of the play, commanding the action, manipulating the drama and coaching the characters around her”.

John Bell’s characters, Jaques and Le Beau are strong and subtle, and his ‘seven ages of man’ speech is mesmerising. Tony Taylor gives fine performances as Adam and Corin with wonderful pacing and comedic timing.

Abi Tucker mesmerises the audience with her fabulous singing. The well produced songs and final cast harmonies are a highlight of the play.

Bell and Evans also say of AS YOU LIKE IT, “it’s sometimes mistaken for simply being about love, love at first sight, love both carnal and idealistic, the love between 2 female friends. The play is also a celebration of the journey taken.”

In deciding to expand on the usually dominant love theme of the play, this production has perhaps neglected this aspect, taking the audience on a rather cerebral journey. Without the deeper and titillating subtleties of real love and lust, the actors have less interaction with each other, which can create romantic disbelief.

AS YOU LIKE IT and Shakespeare’s timeless writing are always open to interpretation. This production is bold and different, modern and universal and invokes much food for thought.

AS YOU LIKE IT plays the Sydney Opera House Playhouse from 21st February to 28 March 2015.

One thought on “As You Like It @ The Playhouse”