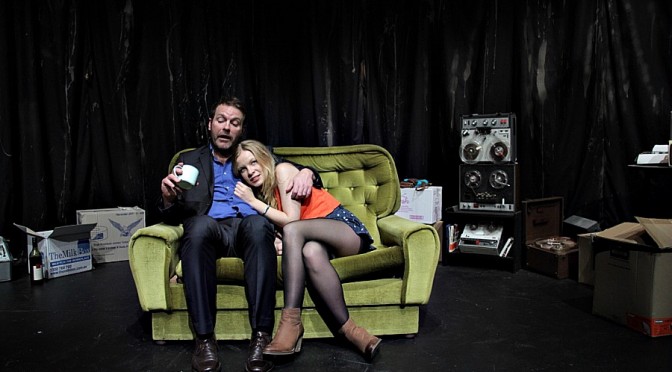 Why haul yourself out in the middle of Winter for a 9.30pm show that only runs 30 minutes? Because it’s fun! That why. You’ve done sillier things for entertainment so make a night of it and head to Brevity Theatre Company’s current production, BEING NORWEGIAN, at the Old  Fitzroy theatre.

In this late night offering, security guard Sean finds himself alone with the young and vibrant Lisa in his new, as yet unpacked , flat. He is unsure, twitchy and nervous and she is flighty, sexually aggressive and …well… Norwegian. Perhaps he is latently Norwegian too. I certainly felt distinctly Nordic by the time I left the theatre.

There’s a code here for sure. For Norwegian read her as unstoppable compared to his complete full stop. Read also that she is light to his dark. Norwegians like the dark apparently; it’s something to do with the moon in Oslo.

The other reveal in the code is laughter. It is so beautifully written by Scottish playwright David Grieg that you can hear the word coming and the laugh builds before Lisa even takes that breath to say…can you guess? The shorthand to the comedy is part of the fun.

As Sean, David Woodland is twisted in knots by his repression and limited ability to engage. He is wound tight and seldom settles. When he does sit, he will spring up in reaction to some invisible stimulus and will babble then stop abruptly. He is charmingly out of his depth with this girl. I especially love the choice that he makes to come alive only once in the first section of the play. And that to ‘Madness’.

As Lisa, Katy Curtain is terrific too. She is overwhelming. Her Lisa builds like a whirlpool in a fiord and she saturates the stage with her efforts to draw Sean out. She manages to be languorously perky … it’s a Norwegian thing!

Director Alexander Butt has used the limited space well and his characters never feel forced into movement. The action is motivated and smooth. Vocally, I really appreciated the way he has his cast use silence. Sean stutters and stammers and clams up. Sometimes Lisa just lets him but other times her lines bang into his, forcing his next thought too quick for him to give the usual consideration and self awareness.

A brilliantly written comedic text is so enhanced by actors who create believable and rich characters that the result is a neat little show that is worth the effort to get there. Bring your sled in case you find that you are Norwegian too and want to toboggan home.

BEING NORWEGIAN continues at the Old Fitz Theatre until 21st June.

For more about Being Norwegian, visit http://www.oldfitztheatre.com/being-norweigian/