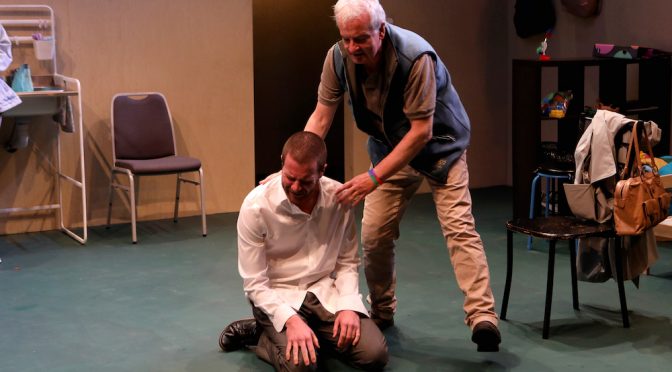 High expectation came with this production and it did not disappoint.

BEFORE THE MEETING is structured around a number of AA meetings, Well not exactly. As per the play’s title, every scene in the play takes place  in the meeting room as regulars gather prior to the meeting. Preparations have to be made, most importantly the urn has to be turned on so that people can have that important coffee. There is just the one scene outside ‘the frame’ and that is when the lead character gives an  extended share.

New York playwright Adam Bock, quite wisely, only peoples the play with five characters. We feel that we get to know them well, their personalities, their eccentricities, except for the fifth character who only makes a brief, albeit thunderous appearance.

The characters are devoted to the meetings. It keeps them going week after week. Even when they break their sobriety they still attend meetings, knowing that they won’t be judged, that the most important thing is for them to turn up and to be honest in their shares.

The play is like a theatrical letter of the deepest appreciation of the AA movement which is now in its 85th year. AA groups continue to save many people’s lives every year, and are ‘prescribed’ by health care professionals.

Kim Hardwick’s direction is superb. As Gail  Jane Phegan gives the most compelling performance I have seen this year thus far. Her delivery of Gail’s extended share was exquisite.

Tim Walker gave a good performance as the angsty, shy newcomer to the group.

Alex Malone’s portrayal of Nicole didn’t feel right. Not exactly sure why.

Ariadne Scouros  as Gail’s estranged daughter Angela convincingly stormed in as she confronted her mother with so much painful ‘unfinished business’.

BEFORE THE MEETING is uncomfortable viewing. I thought it was great. This was theatre that didn’t ask to be liked. It didn’t care that no doubt some people will find it didactic, that some people will turn their nose up at it, that it’s nothing we don’t know… It just didn’t care one bit. It had stuff to say.

Recommended, a White Box Theatre and Seymour Centre production  BEFORE THE MEETING is playing the Reginald Theatre at the Seymour Centre  until Saturday June 11, 2022. Performances Tuesdays to Saturdays at 7.30pm.

Production photography by Danielle LyonsThi as