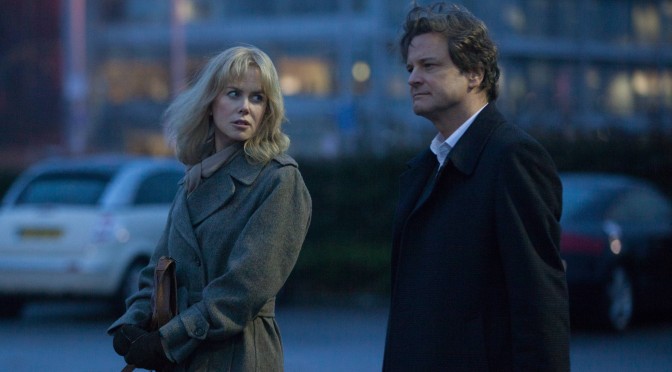 Before you go to sleep in your cinema chair watching BEFORE I GO TO SLEEP, you might witness Nicole Kidman waking up to Colin Firth and having no memory of him being her husband or, presumably starring with him in a far, far better film called The Railway Man.

You see, after she goes to sleep, she loses all memory of the day before. Has she been sleeping with Guy Pearce and he has given her a memento? We wish.

After dull hubby has scurried off to work, Nicole gets a phone call from her doctor, played by Mark Strong, telling her she won’t remember him, but to go to the closet and find a box that contains prompts that will remind her of her therapy so far.

It’s selective prompting though, some memory flooding in foul flashback, others a timid trickle,- she doesn’t know her own address but knows where her husband works and where she used to meet an old friend…

BEFORE I GO TO SLEEP is a film about amnesia that is totally forgettable. All you’ll remember is that someone forgot to tell the film makers that a thriller should be edge of your seat not edge of your sleep.

Thrilling as a warm, blood pumping hump would be to a necrophiliac, BEFORE I GO TO SLEEP was directed by Rowan Joffe who has confused amnesia with anaemia, producing a particularly thin thriller, less a cat among the pigeons, more a bloodless coo.

Colin Firth and Mark Strong sleepwalk through their roles, with Nicole trying hard to make some semblance of sense to her somnambulistic character.

The film seems to have rested on the laurels of the bestselling book by S J Watson on which it is based but has been put to bed far too early with suspense bordering on lethargy and suspension of disbelief ludicrous.

Mandrax or movie, BEFORE I GO TO SLEEP is chalk to the mature, ripened cheese of Gone Girl. Kidman and Firth are no match for Pike and Affleck.